General Patton is credited with saying, “A soldier doesn’t fight because he hates what is in front of him. He fights because he loves what is behind him.” 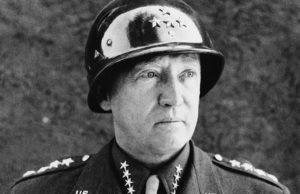 I have seen a number of conversations on social media recently about the Trump presidency being one based on hate. The people who voted for Trump are being portrayed as being filled with hate. When the idea is presented that perhaps there was some other motivation for voters, it is waved away as invalid. The dismissal is based on the idea that those who did vote for Trump endorsed the others that did hate.
This way of looking at our fellow Americans fails to take into account the words of General Patton. It fails to ask an important question. What is behind the Alt-West (Hard Right) that we love so much we are willing to fight for it?

Yes, that’s right. I love my God and His word, the bible. I believe what is written there on the pages. I love the God who gave us the standards by which we are to live. I do not hate those who prefer to live a life that is condemned by God’s word. I love the God that sacrificed His only Son to redeem me and any others who would accept that sacrifice for their sins. You don’t agree with that? I do not care.
Yes. I love my family. Flawed and difficult as my family is, I do love them. I love them enough to fight for my right to pass on my values to them. I love them enough to fight to see that they have an opportunity to live a life of safety, prosperity, and health. You think that is a bad thing? I do not care.
The institutions which have been built by Western Civilization are not bad. Yes, I do love my church. I love the small-town community where I live. I love the university where I studied. I love the

judicial system that was built centuries ago. “Innocent until proven guilty”, “a jury of my peers,” and jury nullification are all things that should be preserved. They are things that have been watered down within the last century. That does not mean we do not still love them. It does not mean that we should not fight to get back to those things. Yes, the judicial system has been twisted into something ugly and unjust, but the idea that the laws should apply to all equally is something that I will fight to preserve. You think those things are bad? I do not care.
However, the greatest failure of those who presume that their fellow Americans were motivated by hate when they voted for Trump is the arrogance to assume that they know what is in another’s heart. You can look at someone’s action. You can evaluate the merits or demerits of that action. However, to assume that you can know what someone is thinking, especially without talking to that person, to seek to understand how they see the world, is dangerous. It replaces your judgment for theirs. It ignores their experiences and claims that their opinion is worthless. It divides the people without need.
It is possible that we see the same problems. It is also possible that we see different solutions to these problems. It is also probable that the difference between us is not about hate. If we are not able to speak because one side has decided that they know what motivates the other side, then we are left with only one option; the option to fight for that which we love. I remind you of the words of General Patton. We are not going to fight to destroy something we hate. We are certainly not going to fight to deter something we find mildly annoying. We will fight to protect that which we love.
You don’t think we should love what we love? We. Do. Not. Care.