At the beginning of the 19th Century, the United States was primarily stuck to the eastern half of the continent, with just a few adventuring souls moving west. Back then Tennessee was the edge of civilization, more wilderness than cultured society. There, in late 1798, Joseph Walker was born.
In the 1820s, he participated in illegal trapping expeditions into New Mexico, then controlled by the Spanish. He went on to serve as a guide for the men like John C. Fremont. 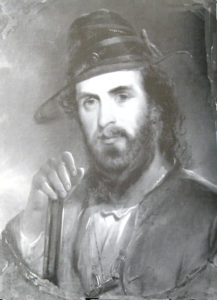 By his early 30s, he was recognized as an effective scout and explorer and set out from Missouri, leading exploration parties toward the West. In 1833, he was exploring the Great Salt Lake of Utah. The goal was to find a reliable overland route to California, in order to allow travelers to avoid taking ships around Cape Horn, which was quite dangerous. The trip was a success and two different routes were found through the Sierra Mountains, the first being discovered going to California, and the second on the return trip. The second route went through “Walker Pass,” named after Joseph Walker by Fremont. It is said that Walker was the first white man to view the Yosemite Valley. The trip was very arduous and the party was forced to eat their horses to survive the harsh conditions. Walker was so overcome by the sights of Yosemite that he had “Camped at Yosemite” put on his gravestone.
Walker would continue to trap, scout, guide, and even became a ranch owner, but he never stopped exploring, blazing trails for others to follow, as the white men continued to stream west. In the early 1860s, he spent two years prospecting, and found gold near Prescott, Arizona. This was the main impetus for the settling of the region.
His eyes began to fail him shortly after that, and by 1867, he retired to his ranch in California, where he died in 1876.
After all of his dangerous exploits, one of the most noteworthy aspects of his 5 decade career as an explorer was that he lost only one man under his command.
Joseph Walker was a true Man of the West.

The Power of Tears