Economics teaches us that nothing in this broken world is free but God’s Grace.  Everything has a cost.  Not matter how universally good you think a thing is, there is always some price to it.  Sometimes that price is obvious and well worth it.  Other times that price is not so obvious.  Often the costliest decisions we make are the ones with the least obvious prices.

You’ve all been indoctrinated, so I know I don’t need to recount the story of the Civil Rights Movement to you.  Blah blah blah… fire hoses… marches… evil whitey being evil…  noble black man being noble.   What I want to point out is one small look at the price that was paid, and who paid it.

Now, before we get to deep into this, I have to explain some methodology here.  Any research you do on Selma is going to focus almost entirely on the Civil Rights Movement.  Period.  Wikipedia?  The whole article is written through the context of the movement.  To get the real story of Selma, you have to talk to the people that lived there, which is exactly what we’ve done.

Rewind past all that, back to 1950.  Selma, Alabama in 1950 is something close to idyllic.  Its population of almost 23,000 was booming.  It had grown 15% in just a few years before.  Businesses were opening, new factories were being built, and folks were working and living in what was one of the prettiest little towns in the United States.   At the time, the population of Selma was about half white and about half black.  Crime was low to nonexistent, and jobs were plentiful.   The town had extremely high marriage rates and high birth rates.

By 1960 the population of Selma has blown up to over 28,000.  The demographics are still pretty much the same, and the town is still in boom mode.  More factories are showing up.  More businesses are opening.  Churches and shops are thriving in a gorgeous down town.  The United Methodist Church has build a large children’s home that is something akin to a large orphanage, except it is a lot less like all the negative stereotypes you associate with orphanages, and a lot more like a bunch of kids living at summer camp year round.  The adults around today who spent time there still get emotional when they talk about their time there.  And they still get emotional when they talk about what a beautiful place Selma was back then.  Before Martin Luther King came and killed their town.

Before the Selma marches, it was a prosperous town.   After?  Well, let’s just look at the statistics.   Every decade from 1830 to 1960, Selma’s population had grown.  Every decade, the town was bigger and more prosperous.  But by 1970, just a few years after the infamous marches, Selma’s population had dropped back below 28,000.   This decline was only just beginning.
During the turbulent times, many businesses in Selma were forced to close, costing a lot of jobs.   After the dust settled, the problem continued to worsen as middle class folks, particularly white folks, left Selma.   The people who lived there felt vilified.  They knew damn well that what was being portrayed on TV was not even remotely close to the reality of their hometown.  The people who were marching weren’t from Selma.  They were bussed in from all over.  The guys with the fire hoses weren’t from Selma either.  They were State Police.

Now you may be saying: White flight.  But this was way more than that.  Its true a lot of white folks left.  But they didn’t leave because they were upset about blacks moving to their neighborhoods. 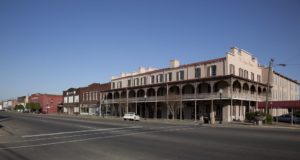 They left because they couldn’t stand to be associated with everything that had happened there.  If you were a white dude in 1970, and you told someone you were from Selma, you were automatically a racist scumbag piece of shit who beat poor peaceful black folks with a billy club.  So they left.

So what is Selma today?   It’s a hell hole.  Today, Selma’s population has dropped to 18,900, and of them, only 4,157 of them have jobs.  The population hasn’t been this low since the Great Depression, and back then Selma was growing.  The population is now 80% black.  Its’ one of the poorest most crime ridden towns of its size in America.  It’s crime index is almost 400% higher than the national average.  Selma’s median house-hold income is 40% lower than the state of Alabama’s and 50% lower than the whole US.   Selma is one of the 100 most crime ridden cities in the US, according to City-Data.

Maybe they do.  But the ones we spoke to didn’t.

Hymn: I Heard The Voice Of Jesus Say