One of the greatest self-inflicted sins a nation can commit is to import immigrants who have no ties to the past sacrifices of the nation’s sons. People that don’t have any sort of tie to the blood spilled in the past won’t have any respect for the inheritors of the price paid.
Our customs are not theirs. Our revered and honored dead make no impression on them. 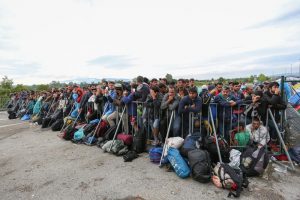 And how can it be different for them? To the immigrant that has no motivation to become American the past sacrifices are meaningless. People with no relation to them fighting for principles they don’t understand to die in a cause that is completely foreign to them.
A nation’s past is upheld by those that understand and honor it. Nothing ties people together more than family and shared history. Blood calls to blood in a way that can be ignored but never replaced or imitated.
Allowing waves of foreigners to invade disrespects all those native sons and daughters of the nation that have come before. Those that have given their lives to make their nation a little better, a little more protected, a little more prosperous, for themselves and their families.
The waves of immigrants coming in have no desire to do anything but bring their homeland with them. They are utterly uninterested in your dead. The sacrifices done in the name of family and nation are trodden underfoot by those with as much connection to those deeds as they do with the far side of the galaxy, at best. At worst, your fallen family members fought their nation, their families, and seeing their enemy at their feet, they will not show mercy or kindness.
With no connection to the past, the present is merely a resource to be exploited. The lands are laden with riches to plunder, a population to use as they desire, and new lands to populate. They will not care about you or your children. You will be swept aside and your children killed or enslaved and your grandchildren, should they exist, will curse the faint memory of you. Your great-grandchildren will know nothing of you or the nation you once called home.
Mass immigration is an insult to the past, a blight to the present, and the death of the future for a nation.
Anyone pushing for it is an enemy of the West.