The Dallas Cowboys: The Outrageous History of the Biggest, Loudest, Most Hated, Best Loved Football Team in America. By Joe Nick Patoski. (New York: Little, Brown and Company, 2012. Pp. ix + 804. Introduction, Acknowledgements, Sources, Index. $29.99 cloth).
“It couldn’t have happened anywhere else” – the closing words of Patoski’s definitive history of the Dallas Cowboys point toward a deeper purpose (718). This is not just a study of the Dallas Cowboys, but a thoughtful analysis of the diverse personalities associated with the team, the changing nature of the NFL – much of the change coming from innovations within the Cowboys’ organization, and the people of the developing Dallas-Ft. Worth Metroplex of the late twentieth and early twenty-first centuries. Using the football club as the organizational framework upon which his narrative is hung, Patoski traces the history of North Texas, giving attention to racial tension, political upheaval, changes in culture, and the interrelation between football, tradition, and identity in the football-crazed region.
While the narrative often moves into decidedly non-football related topics, this is definitely a football book. The rising importance of the Dallas Cowboys to the people of the Dallas area is a central focus. From the early days, when few fans would show up for games, to the unveiling of “Jerry-world” in 2009, Patoski never strays far from his primary focus – providing a history of “America’s Team.” For younger fans – those for whom the 1990s are the “good old days” – the book provides an important service by highlighting the early years of the franchise, when professional football took a back seat to the college game, and even local high school football. Patoski argues that it was due to the innovations that Tex Schramm, Gil Brandt, and Tom Landry brought to the table that helped the NFL’s meteoric rise in the public perception. While the Dallas Cowboys have been in existence for over fifty years, nearly 500 of the book’s 700+ pages of text are dedicated to the first thirty years of their history, with only 200 pages dedicated to the more recent quarter century. 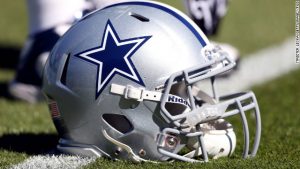 Though the Dallas Cowboys serve as the book’s focus, it also highlights important social themes, such as race, politics, economic development, and drug culture. The cultural changes of the 1960s-1970s are given prominence. From the assassination of JFK to the drug-related arrests of high-profile players, the impact that the team as had on the city is analyzed. In the midst of the Civil Rights Movement, race meant little on the team; what mattered was whether one could contribute to the team and produce a winner on the field. New technology led to increasing wealth for the region, and began to transform Dallas into a modern city. Through these cultural transformations, the Dallas Cowboys began to produce competitive teams, expanding the team’s fan base. The fan’s attitudes and interest in professional football, and the Cowboys in particular, began to transform along with the city (123, 147).
There is a dichotomy between the descriptions of many of the major personalities. While original owner, Clint Murchison, is fleshed-out, from his freewheeling playboy youth to his religious conversion in his later years, providing many fans with a first real look at the man who brought the Cowboys to Dallas, others are not afforded the same treatment. For example, Tom Landry never seems more than a caricature in Patoski’s book. Older readers will learn little that was not already known about the man, and younger readers will not get a firm grasp on his place in the organization’s history. Still, in spite of these minor quibbles, the reader will gather important details on the formation, development, and importance of the Dallas Cowboys.
Ultimately, this book is about the fans and is for the fans. Patoski never lets the fans get too far from the narrative, where they serve as the foundation for the success of the organization. They buy the game day tickets and merchandise, read the sports pages for the latest team-related information, and alternately revile or praise team leadership. Without them, the team would never have survived to enjoy the many years of success. The book ends with an observation that the game, city, world, and team has changed over the years, but that what happened could never have occurred anywhere else; the fans, as they came to embrace the Cowboys, and to hold the team to high standards, were the reason that the woebegone teams of the early 60s became “America’s Team.” Patoski has provided a wonderful homage to innovation, colorful characters, an evolutionary culture and game, and keeps the reader engaged, as a participant in the story, from beginning to end.

Mass Immigration: An Insult to the Past, the Death of the Future