More fake news from the Washington Post.
Rush Limbaugh reported on his radio show that the article was originally titled “Immigrants are now canceling their food stamps for fear that Trump will deport them” The link address on the article still has that title and their tweet supports the claim. 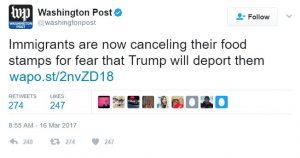 Some editor must have decided that it would have more impact if the immigrants were going hungry. This article is fake news. The Post actually admits in the article:

The evidence is still anecdotal — and The Washington Post was unable to speak directly with immigrants who chose to cancel their SNAP benefits.

They admit they have no evidence that anyone is going hungry. More importantly, immigrants don’t get deported unless they are illegal, or if they are here legally, there would be a good reason. Illegal immigrants should not be getting food stamps. Legal immigrants shouldn’t get them either. You shouldn’t come here to burden us. If this fake news were true, it would actually be good news. Either the “immigrants” are leaving, or they decided they didn’t really need those benefits.
There’s no way anybody is actually going hungry. Even if they were, the truth is, they aren’t Americans. They are #FakeAmericans and have to go back.

Republican Party: Red From the Start

This Is How You Do It