The Last Stand of Fox Company: A True Story of U.S. Marines in Combat by Bob Drury and Tom Clavin is excellent reading material for Men of the West.
It tells the story of Fox company of the 2nd battalion, 7th Marines, 1st Marine Division during the Battle of the Chosin Reservoir.
Background:  In late fall of 1950, General McArthur had ordered the Marines to march north. The US force of 30,000 men were surprised at Yudam-ni along the Chosin Reservoir by 120,000 Chinese soldiers. The US forces quickly were surrounded and cut off. They had break through the encirclement and fight their way back down to the road to Haguro-ri and eventually were evacuated at Hugnam. There were many heroic actions during this battle. The American forces were forced to withdraw, but the fact that they were able to get out instead of being annihilated is one of the more remarkable things in American military history. The greater part of the Chinese 7th army was rendered ineffective after the battle. 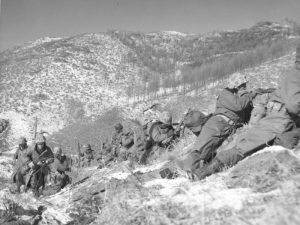 Fox company had been left behind on the journey to the Chosin Reservior.  They were tasked with holding a hill along the road at the critical Toktong Pass. 220 men went up the hill in the bitter 30 below temperatures; three days later only 82 were able to walk off under their own power. The fighting was intense, and several of the men earned the Medal of Honor in this action. This book tells their story. Highly recommended.