Are you looking for a powerful movie? Then 13 Hours is just what you are looking for. Based on the true story of the Benghazi encounter between Libyan militants and American forces. The event is famously remembered as a major failure of the Obama Administration’s Middle Eastern policy, and prompted then Secretary of State Hillary Clinton’s famous “what difference, at this point, does it make.”
But the film focuses on the human story of them six men – no, they are heroes – who fought for one another, as they protected and saved 30 non-combatants, who were ensconced in a lightly protected consulate and a secret CIA compound. If you doubt that there are still Americans who carry on the mantle of Alvin York and Audie Murphy, then this film, and the real men who inspired it, will allay those fears.
I am assuming that you already know the basic storyline of what took place. While I will not hit on every event in the story, you can assume that there are spoilers below.

From the beginning of the film to the emotional conclusion, tension permeates the plot. The six former military personnel, serving as military contractors, are in a land where they are not wanted, providing security for the CIA compound, and occasionally serving as bodyguards for clandestine operatives.
The primary action takes place after Ambassador Chris Stevens decides to spend a few days in Benghazi, at the consulate, which is then attacked by Libyan militia, leading to the death of the ambassador and another civilian, Sean Smith. Other personnel at the consulate remain under siege and face certain death.
This is when the mettle of the heroic contractors was demonstrated. Disobeying orders to remain in the CIA compound, they travel to the consulate, saving the rest of the men there, bringing them back to the compound.
Unable to leave the country at that time, they hole up in the compound, fighting off numerous waves of enemy fighters who attack. Using their superior military training, these six men, along with a few of the saved consulate men, repulse several attacks, suffering only minor injuries.
Eventually, reinforcements arrive, another small group of contractors led by Glen Doherty, and together they make ready to move to the airport and escape from Libya. Unfortunately, the native truck drivers all abandon them, leaving the entire group stranded at the compound, where they face one final attack, this time including mortar fire. In this exchange, two of the contractors are killed.
Just when it seems that all hope is lost, a group of friendly Libyans show up to escort the survivors to the airport and safety.
At the heart of this story, we find a group of men faced with a no-win situation, yet valiantly doing their duty. They ignore orders, and by doing so, save over two-dozen lives. We get short excerpts that give us background on the characters, showing their families and ties back home. We also see how they work together to accomplish their mission. The fact that this is a true story only highlights the quality of men being portrayed, and the film should give the viewer hope that there is still a chance that our country can be straightened out. We have such men in our midst.
There is quite a bit of information available about the true story, and how true the film stays to those facts. You can also visit websites of some of the survivors.
So while we are sad that this event happened, and that heroic lives were lost, we salute those who fought, bled, and died doing their duty.
Besides Ambassador Stevens and Sean Smith, Tyrone “Rone” Woods and Glen “Bub” Doherty lost their lives. The other men, who survived (though some with horrific injuries) were Kris “Tanto” Paronto, John “Tig” Tiegen, Mark “Oz” Geist, and others who are unknown, with pseudonyms being used in the film: Dave “Boon” Benton, and Jack Silva.
The make up of these men can be summed up best by the words of one of the female characters, as they depart Libya: “I don’t know how you survived tonight, but I know how the rest of us did.”
Watch this movie. You will be glad you did. BTW, it is based upon a great book of the same name. Below is a picture of the signed title page of mine. You will see Kris “Tanto” Paronto’s signature there. 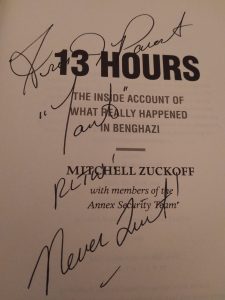 First, the bad (mixed with some good). While some comparisons will happen, I’ll try to be

Why Does Woke Writing Fail?

And why do we only respond, as a civilization, to male heroes and strong women who