Editor’s Note: This comes from one of our friends, Jasper Thorsson, himself a Man of the West, though not a regular contributor here. He is also recently married, and offers his thoughts after the first few weeks of his married life. He has promised to submit more articles soon.
“Marriage is hard, but you get to have sex without looking over your shoulder.”
That’s pretty much all I had ever heard to the positive on the intimidating prospect of risking half of my goods and earnings on a wife. Now, being an intelligent man, I divined that there were enough bonuses and advantages to holy matrimony (literally, making a woman into a wife and mother) and buckled down and got myself hitched after I found a wonderful woman who actually wanted to become a wife and mother and had prepared herself well.‎
In the short weeks since then, I have been blown away by the added value being married has added to my life: I do some cleaning, two get to enjoy it; I buy a nice treat, I have a companion to share it with; I find victory, progress, success or even failure, and I have someone to share it with that is far superior to a text or a Facebook post, which I nervously check to determine my social standing and value and whether anyone cares. Things are awesome. Today though, I would like to draw attention to something that I have watched stealthily creep in and start shotgunning value all over my life: Cooking. 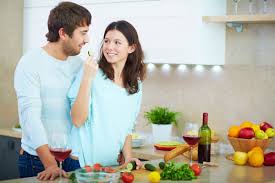 Having good food wasn’t foreign to me during my bachelorhood. I cook very well and enjoy it…when I make time to set up in the kitchen. I certainly did not always take the time to make the delicious gourmet meals I so enjoyed. My wife is a good cook and generally is thrilled to be a housewife—her dream—but my inspection of the changes in my life has led me to understand why, even to an able housekeeper like myself, having a wife has led to a tremendous upswing.
‎In cooking, I like to say there are three ways to cook, and two habits to cook from: Habitually you either are very conscious about your diet–like a bodybuilder or an athlete who mixes their own shakes, actively takes supplements or selects ingredients, and monitors their diet strictly–or you are looser, grazing, eating what is near you or is on sale. From either habit, there spring three different ways to cook: Quick, Worked, and Gourmet. Let’s face it: Some days you don’t want to make a gourmet meal or even prep your food. You just want to fill up on something with little thought.
Quick is obvious, ranging from a fast food pickup to an apple and peanut butter. This was a habit in my life before, generally for at least one meal a day and now it has all but vanished. The true culinary value provided by a wife for an active, energetic working‎ man with ambitions to climb higher is not that he eats three Gourmet meals a day now (unless the woman be both accomplished and fastidious about her cooking) but that he cuts out on the unhealthy and usually deleterious slowdown to his mojo that comes from Quick eating on a regular basis. It wears at you, makes you think less of yourself when you aren’t eating well, on top of the effect of generally low-quality food.
Worked food is where a housewife’s value therefore really improves your bottom line and increases the joy; additionally, having a devoted kitchen-keeper who is mindful of and responsible for another’s well being lends a natural gravitation to the conscious habits of good nutrition and higher-quality foods.
So much discussion of modern marriage centers on the social natures of man and woman, cultural earmarks, and fears;‎ the dimensions of home making, amplification for the more ambitious dreamer’s plans, mutual support in its many forms, and the irreplacability of a family close at hand seem so forgotten! I never dreamed despite many advisers and many friends sowing into my hopes and plans for marriage that an arrangement with a similarly-visioned and supportive mate would result is so much happiness so quickly. There is a great deal of quid pro quo and discussions with a cynical bent on the subject of modern marriage that center around sex and fear—at least among the young male demographic that I am a part of—I am happy to shed some light on marriage’s upsides for the interested.

If you have questions for a newlywed or a comment to add, remember to join the discussion below!