Editor’s Note: Jacob Cushing (1730–1809). A Harvard graduate (1748) and the minister of Waltham, Massachusetts, from 1752 onward, Cushing was a lively personality and an effective minister. He stayed close to the Bible in his preaching and so managed to satisfy conservatives as well as liberals. He was modest, reasonable, and methodical. He was on good terms with the eminent of Massachusetts politics, including John Hancock, James Bowdoin, and Thomas Cushing. He delivered the convention sermon in 1789, and the Dudleian lecture at Harvard in 1792 (not printed). Harvard conferred a doctor of divinity degree upon him in 1807.
Of Cushing’s fifteen published sermons, this one of April 20, 1778, is the sole political sermon, a fiery denunciation of inhumane acts of two brigades of British soldiers in Lexington, Massachusetts, on April 19, 1775. This is taken from Ellis Sandoz, Political Sermons of the American Founding Era: 1730-1805, 2 vols, Foreword by Ellis Sandoz (2nd ed. Indianapolis: Liberty Fund, 1998). Vol. 1.

Rejoice, O ye nations, with his people, for he wilt avenge the blood of his servants, and will render vengeance to his adversaries; and will be merciful unto his land, and to his people. Deuteronomy 32:43

That there is a God, “is the prime foundation of all religion.” We should therefore employ our utmost diligence to establish our minds in the stedfast belief of it. For when once we have firmly settled in our minds the belief of God’s being, it will mightily influence all our powers of action; it will invite our hope, alarm our fear, and address to every passion within us, that is capable of persuasion, and be in us a never-failing source of devotion and religion.
A God without a providence, is a solitary kind of being, and affords but gloomy apprehensions. For ’tis by his providence that all intercourse between God and his rational creatures is maintained, therein he exercises and displays his perfections, therein his power executes the contrivances of his wisdom, and his wisdom plans the methods of his goodness and grace, which open to the view and admiration of the wise and good, through successive ages and generations.
But that branch of providence, which, in a peculiar manner, demands our attention on this occasion, and should excite our gratitude, is God’s uninterrupted government of the rational part of his creation, mankind in particular. For as all government, so the divine, supposes laws, and laws suppose rewards and punishments, of which intelligences only are capable.
Since, therefore, God interests himself in the affairs of mankind, and the universal administration of his providence extends to all his works, a large field opens for the employment of our contemplative minds. And we are naturally led to consider this divine government, as respecting communities; the affairs whereof are important, and upon which the order and felicity of the world greatly depend.
God is the sovereign of the world, and disposes all things in the best manner. All blessings and calamities, of a public nature, and the revolutions of kingdoms and states, are to be viewed as under the special direction of heaven. Hence the scripture saith, that God “increaseth the nations, and destroyeth them, he enlargeth the nations, and straitneth them again—sometimes he blesseth them, so that they are multiplied greatly; again, they are minished, and brought low, through oppression, affliction and sorrow.”
These truths being necessarily interwoven with religion, and extensively useful under the varying scenes of life, and misteries in providence—the main design of the present discourse, is to awaken our attention to the passages of divine providence—and lead us to a religious improvement of God’s hand, in the tragical events that took place on the nineteenth of April, 1775. I mean the murderous war, rapine and devastation of that day, which we are now met to commemorate.
Under this visitation, or the greatest trials imaginable, we have abundant consolation, that God rules in the armies of heaven, and among the inhabitants of this earth.
The words but now read, may be, perhaps, not unfitly applied to us, for comfort and encouragement under God’s chastisements, and his usual conduct towards the enemies of his church and people: “Rejoice, O ye nations, with his people, for he will avenge the blood of his servants, and will render vengeance to his adversaries, and will be merciful unto his land, and to his people.” These are the concluding words of Moses his song, which setteth forth God’s works of mercy and judgment towards the children of Israel, his covenant people. And though, in their primary meaning, they respect that nation only, yet they may be accommodated and fairly applied to God’s faithful and obedient people, at all times, and in all ages; inasmuch as the latter part of the prophecy reaches unto the latter days, and is not yet wholly fulfilled.
Some interpret the former part of the verse thus, “Rejoice ye nations, who are his people,” supposing it to be a prophecy of the gentiles becoming one body with the people of Israel; because Moses had supposed in this song, great enmity between them, and that sometimes they had sorely plagued Israel; as at others, God rendered to them according to what they had done unto his people: but now breaks out in a rapture of joy, to think that they should one day be reconciled, and made one people of God. 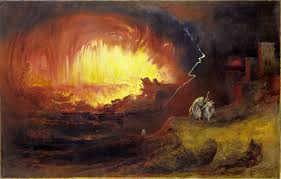 And the church of Christ, notwithstanding all oppression and persecution, shall one day break forth as the morning, clear as the sun, fair as the moon, and triumph over all its potent, cruel adversaries; even when the glorious things spoken of her, in the latter days, shall be accomplished; corresponding to the prophecy of Isaiah, chap. lx. wherein describing the Jews restoration from captivity, takes occasion therefrom to represent the glories of Christ’s kingdom, which began upon the first publication of the gospel, but will not be compleated ’till the fullness of Jews and gentiles are come into the church; and saith, “Violence shall no more be heard in thy land, wasting nor destruction within thy borders: Thy sun shall no more go down, neither shall thy moon withdraw itself; for the Lord shall be thine everlasting light, and the days of thy mourning shall be ended: Thy people also shall all be righteous; they shall inherit the land forever, the branch of my planting, the work of my hands, that I may be glorified. A little one shall become a thousand, and a small one a strong nation: I the Lord will hasten it in his time.”
From the preceeding discourse, in connexion with our context, arise the following truths, for instruction and improvement of the dispensations of heaven; and therefore proper for our meditation, on the present occasion. As,
That we should extol the Lord of heaven and earth, who is possessed of glorious perfections, which render him the only fit object of our religious worship.
That we should acknowledge the infinite power of our God, and his sovereign dominion over all; and give honour and service to none other.
That his works of providence, no less than of creation, are most perfect; since he doth nothing without the greatest reason, and according to the rules of exact justice.
That we are ignorant of the methods and reasons of God’s judgments, that take place in the world.
That all the evil, and all the good, that befalls any man, or the whole church, proceeds from the just and equal administrations of divine providence.
That in God we may find a sure refuge, at all times, for he is in one mind, and changeth not.

That he will render vengeance to his adversaries, and do justice to the enemies of his church.
That he will be merciful to his people, his humble, penitent, praying people, and will, in his own way and time, avenge the blood of his servants.
That therefore we have abundant cause to rejoice with his people; and to yield chearful and constant obedience to him.
These hints might be profitably enlarged upon; but I must leave the more particular improvement of them, to your own private meditations; and fall in closer with the design of this anniversary, which is to keep in mind a solemn remembrance of the origin of the present murderous war, and more especially of the innocent blood wantonly shed around this sacred temple; and the subsequent slaughter and desolation by British troops, on that memorable day, April nineteenth, one thousand, seven hundred, seventy-five: A day religiously to be regarded by all professed christians.
The distress and anxiety of the inhabitants of this town, and the adjacent, arising from the singular and horrid scenes of that dismal and dark day, tho’ diminished by time, can never be effaced in the human breast.
With compassion and tender sympathy, we renew the sorrow and lamentation of the bereaved, for their deceased friends and relatives, who then fell a sacrifice, bled and died, in the cause of God and their country, by the sons of violence, and hands of murderers, as multitudes have fallen since in our land, whose blood we hope in God, he will speedily and righteously avenge, and restore peace and tranquility.
The all-interesting events of that day, that distressing day, have been painted in lively colours, by my worthy brother:* and the leading steps, or rather stretches of parliamentary power, and hasty strides of British ministerial vengeance, to reduce Americans to submission and abject slavery (as introductory to this unjust and ruinous war) have been set in a striking point of light, by my rev. father,† who have gone before me in this lecture.