During the hard years of WWII, when truly massive amounts of canned American foods were shipped overseas to feed soldiers and allies, the American government promoted the home garden as a means to victory. 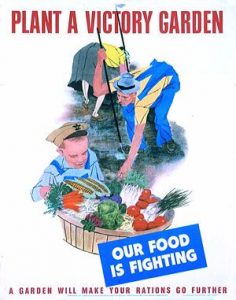 Americans answered the call, planting gardens in yards and empty lots, even on rooftops. It’s estimated that 20 million Victory Gardens produced 10 million tons of fruits and vegetables, an amount nearly equal to the nation’s commercial production during the war years. In 1943, Americans purchased almost 400,000 canners to preserve that harvest, a five-fold increase over the previous year and a total unmatched since.
In addition to relieving much of the pressure of a food distribution system strained to the hilt, Victory Gardens provided a tremendous morale boost. Young or old, rich or poor, male or female, everyone could help the war effort. Everyone could enjoy the fruits (and in many cases, vegetables) of this collective patriotic effort.
The government stopped promoting Victory Gardens when the war ended. In response, Americans stopped planting and went back to the grocery store. Though sporadic food shortages broke out across the country as the national food distribution system struggled to reorient itself from wartime production, they were brief and quickly forgotten. The collective effort of million of Americans growing their own food was no longer needed, or so it seemed. But it’s a shame that we gave up our Victory Gardens, because the garden cannot just provide a chance to beat an overseas menace, it can provide you with victories right here at home.
Gardening is good for your pocketbook.
Three ounces of dried, crushed oregano leaves for your “homemade” spaghetti sauce will set you back $6 at Walmart. A package of 200 oregano seeds costs half that amount, and the perennial plants that you grow from them will keep you in fresh oregano for a lifetime. A single bell pepper will cost you a buck or two, a bell pepper plant will provide you with fresh peppers all summer long. An apple tree costs the same as five pounds of apples, and can provide you hundreds of pounds every year.  The difference, of course, is made up by your work. But it’s work performed directly for your loved ones – you pay neither income tax nor sales tax on a plate of steamed carrots from your garden.
We are all looking for ways to become anti-fragile, to disengage from a system that has economic leverage over us and thereby holds us in bondage. Gardening is an economical way to reduce the worries of job loss, inflation, even economic collapse.  Having plenty of fresh fruits and vegetables on hand, grown by hand, can go a long way to providing you with economic freedom.
Gardening is good for your health.
Growing your own vegetables and fruits is the best way to provide fresh, nutrient-dense foods for your family.  The lettuce you’ve grown yourself is better for the kids than lettuce grown in Mexico, covered in pesticides, then driven a thousand miles by truck to your local Wal Mart. Your own corn on the cob tastes better, it is better, than that can of creamed corn on the bottom shelf of your local grocer. 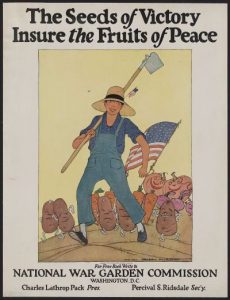 We are a fatter people than we have ever been before – than has ever existed anywhere – and part of that can be laid upon the foods we buy. Take a look at the label of your favorite boxed or canned food, then compare it to the label on your own, home-grown tomato (hint: if you find one, it will say “tomato”). A steady diet of partially hydrogenated vegetable oil, potassium benzoate, and calcium disodium edta is not doing our health any favors. You simply cannot eat fresher, healthier food than what you’ve grown yourself.
Time spent in the garden is also better for your body than time spent watching TV or reading Drudge. In the garden you are moving, stretching, lifting – all those motions that your muscles are not getting while you sit at a desk all day. Start a garden project, whether building raised beds or transplanting raspberries to a new trellis, and you’ll be amazed how sore you can wake up the next day. And the result is far more emotionally satisfying than walking on the treadmill.
Gardening is good for your soul.
If the Heavens declare the glory of God, the dirt declares His careful planning. Everything in the garden works together. Everything has a purpose and a place. Almost nothing goes to waste. One can choose to believe that such an elegant interconnectedness of life arose from time and chance, or one can see the loving hand of a Creator in its design.
I’ve never met a gardener who was also an atheist. Perhaps that’s a function of where I live – such fools are few and far between here. Or maybe it’s just hard to disbelieve in a Creator when buried up to one’s elbows in His creation.
Gardening, especially quiet hours spent gardening alone, provides an opportunity to contemplate the miracles of life and of growth. The frustration of weeding recalls to us the curse under which we live in this broken creation, which itself groans in its bondage until our Savior’s return. Harvest time is an experience of God’s goodness toward us and His providence for our needs. There is time here to talk to God, and to listen, and to learn.
It is perhaps not a coincidence that the first man was tasked with tending a garden, and in that garden he met God. God is still there, and while the potatoes, carrots, and tomatoes you grow will sustain you, their Creator will nourish your soul when you seek Him.

More than any other foreign nation, the relationship of the United States to Israel dominates our

In my 14th livestream I talk about the political realignment that is occurring before our eyes,

Everything Old is New Again

Who is Really Behind Free Meds for Covid-19? Editor’s Note: A new friend, Gustavus Adolphus, has