A big pet peeve of mine is this idea that if something makes sense to you then it is therefore true.  It’s something I call Plausible Realibility.  It’s when one thinks that since they can explain something in a way that sounds good and makes sense, it becomes reality.  What’s more frustrating is this sounds like it would be something that dumb people would do, but in reality, dumb people are used to having things explained to them, so assuming they know how something works intuitively isn’t even a remote possibility.
No. This is a failing of smart people, and it drives me crazy.
Now one place where Plausible Realibility really shows up is in gun culture.  But it is slightly different there.  In gun culture, even the dumb people do it,  but most have no idea they are doing it.  They think they are being tactical or trying to make themselves sound informed.
For example: 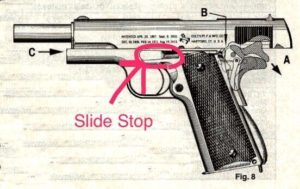 There are some good arguments for why you shouldn’t use a slide stop as a slide release.  In fight or flight mode, there are physiological changes that take place that reduce your manual dexterity.  So you can make the argument that it is more effective to practice the grip and rip, where you rack the slide yourself.   Fine.  We can debate that.  But there is another part where they go completely off the rails and say things like, “the slide release can cause wear and jams because the spring isn’t fully compressed.”
Now see… this is just stupid.
I’ve done this thousands of times.  I’ve never had a misfeed like this.  But that doesn’t matter.  Someone thought it up, and it sounded good, so it’s true.
Here’s another one.  The M9 is unreliable in a dirty environment because it has an open slide.  See, sand or dirt could get in that big opening and gum up the works.  So the gun is unreliable.
Never mind that the US military has been using the thing mostly in deserts and jungles for going on 40 years.  It has its shortcomings.  Reliability isn’t one of them.
The fact that you can dream up a mechanism by which a given firearm may fail does not mean that firearm will actually fail that way.  In fact, this is one thing that science is actually good at.  We can test it.
So the next time you hear some expert tell you he doesn’t like this gun or that gun because theoretically blah blah blah…  just ask him if that firearm has actually failed that way, or does it only fail that way in his head.  Theory is nice.  Reality is better.
Before I typed this, I loaded and reloaded 3 different pistols 20 times each. They were a  Steyr M40a1,  a Beretta 92fs, and a HK USP 40 compact.
I used the slide release method every time.
60 out of 60 times the round fed into the chamber just fine.
Science, bitches.  That’s how it works.

David The Good: Weeds For Breakfast