When the Germans rolled into Poland with over 40,000 troops, they were expecting little resistance from the Poles.
What they got instead was the Polish Thermopylae.
The Polish army had been building up a defensive line stretching 5.6 miles along the banks of the Narew and Biebrza rivers, with the village Wizna in the center. They had chosen the place carefully. It was an important area of Northern Poland by the lay of the land and the natural features would force any ground troops to contend with their defenses before they could gain access to Warsaw and the southern regions of Poland.
Before the mighty Wehrmacht hit them, the Poles had finished construction of 16 bunkers out of the 60 planned. Out of the 16 built, six bunkers were made of heavy concrete, two light concrete, the rest were pillboxes fortified by sandbags.
All in all, it was the start of a decent defensive structure. On September 7, 1939, it would be put to the test.
Some reports indicate there were 720 Polish men defending the bunkers, another indicates there were only 360 men. It doesn’t matter the exact number when compared to the massive force the Germans threw at them. These were mostly conscripts that had been called up in August, not trained professional soldiers.
The German 3rd Army began the capture of Poland on September 1st, 1939. Their plan was to start from what was old East Prussia and push into Warsaw. By September 7th, parts of the 3rd Army were attacking and capturing Wizna and surrounding areas and were facing Polish opposition which blew bridges and harassed German troops.
Before the Germans had reached Wizna, Captain Wladyslaw Raginis had been named the commander. In response to the German thrust and their efforts to demoralize the Polish troops by dropping leaflets urging the Polish to give up on a lost cause, he swore to his men that he would never surrender. He would keep fighting and resisting the German forces until the end.
The German artillery barrage started pounding away the Polish artillery, supported by aerial bombardment. The Polish artillery had to fall back. The Germans pressed in from the north and more came up from the south. In a short time, the Wizna Poles had been isolated from the rest of the Polish armed forces, as the Wehrmacht cut off all roads to them. 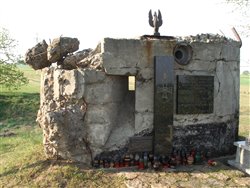 The fighting was intense as the Germans pounded away at the defenses. They suffered losses far greater than the Polish, over 900 infantrymen dead and more than 10 tanks destroyed, trying to crack those few bunkers. The Polish had dug trenches and strung the area with barbed wire lines and buried land mines.
The Polish fought like lions, knowing they were doomed, repelling several assaults during the night of the 9th and the early morning of the 10th. Around 11 am, the Germans managed to destroy all but two of the bunkers. The Poles continued to fight, despite most of the survivors being wounded and their machine guns mostly destroyed.
The Germans called a cease-fire under a truce flag. Around 1:30 pm, Captain Raginis ordered his men to surrender. They were out of ammo and all his men were wounded. True to his word, though, he didn’t surrender. He waited until German soldiers were in the last bunker with him before he pulled the pin on a grenade, killing himself and the Germans. He went down fighting.
The Germans finally cracked Wizna’s bunkers, but it took them three days with an overwhelming force to do it. The Polish men lost, it’s true, but they made the Wehrmacht pay in blood and materials for every inch.
The Swedish metal band Sabaton’s “40:1” is a great metal tribute to the brave Polish men.

Despite being massively outnumbered and outgunned, the Polish men were defending their homeland. They didn’t stop until they couldn’t go on. I bet if they had had the resources, they would have kept fighting until the last man had been killed.
In the face of certain doom, they stared death in the eye and chambered another round.
We could do worse than to take their example to heart. 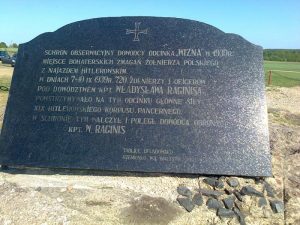