While we are on the subject of the old English telling of tales with a morality behind them, might as well dust off another one.
This is from the Gesta Romanorum – Deeds of the Romans. The tome is interesting in that it predates much of the literature we are familiar with in Shakespeare, Chaucer, and others. However, the seeds and themes of the more recognizable works to modern readers were already circulating around.

The Man and the Honey in the Tree
There was an Emperor reigning in the city of Rome, and among all other things he loved hunting well. And as he rode at a certain time in a forest, he saw a man run before him with all the might of his body.
A unicorn was running after him, whereby the man was greatly afraid, so that for fear he fell into a great ditch. Nevertheless, he took hold of a tree by which he won out. And then he looked down and he saw at the foot of the tree a hideous pit and a horrible dragon lying therein, undermining the tree and waiting with an open mouth when he should fall; and beside this dragon were two beasts, the one was white, the other was black; and they gnawed at the root of the tree with all their might, to throw it down, in so much that the wretched man felt it wag; and about the sides of the ditches were four frogs moving about, which with their venomous breath envenomed all the ditch.
He cast up his eyes and he saw a flow of honey falling from branch to branch; and he set his heart so much on this sweet sight of the honey, that he forgot the other peril. Now it happened that the Emperor went by the way, and because he saw him in such great peril, he fetched to him a ladder, that he might come safely down; but he gave himself so much to this sweetness that he would not thence, but ate the honey, and made him merry, and forgot the perils. Within a short time, he fell down into the mouth of the dragon; and the dragon went down into the pit and devoured him.
Morality
Dear friends, this Emperor is to be understood as Jesus Christ, who loveth above all the hunting of souls. The man that fleeth is a sinner; the unicorn is death, which ever followeth the man, to kill 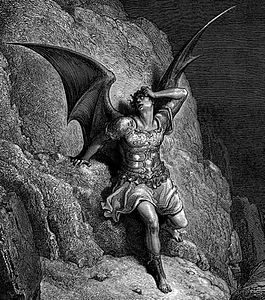 him; as it is said Omnes morimur – “all we die”. This ditch is the world; the tree in the ditch is the life of man in the world, which life is the two beasts, black and white, which two times (night and day) rock and consume the tree. The place where the four frogs come out is the body of man, from which come four qualities of humor, by which four, set together inordinately, the image of the body is dissolved.
The dragon is the Devil; the pit is Hell; the sweetness is delight in sin, by which a man is blinded, so that he may not behold his high perils; the ladder is penance. And when a man delayeth to take that ladder, for the delight ofttimes he hath in the world, he falleth suddenly into the mouth of the Devil, that is to say, into his power in Hell, where the Devil devoureth him; of devouring there is no hope to escape, as it is said in the psalm, Spes impiorum peribit – “the hope of wicked men shall perish”.

The Changing Landscape, Part 2: The Difference A Strong Leader Makes