Editor’s Note: We offer here the first portion from the introduction of this handy little booklet. You can follow the link below to read (and even print out) the entire thing. The site owner gives permission for the contents to be spread far and wide, as long as they are given freely. We recommend you give it a look, and brush up on your  manners, if need be.

Many readers of this booklet have witnessed, over the last three or four decades, a precipitous decline in not only the practice of good manners, but also the comprehension of the need for good manners.  Many people bemoan the ever-increasing anger and violence of our Socialist-afflicted society, and wonder aloud at the causes and cures for such widespread discontent in a nation greatly blessed in natural resources.  It behooves us all to recognize the importance that good manners play in the satisfaction and enjoyment we all receive from the society in which we live. 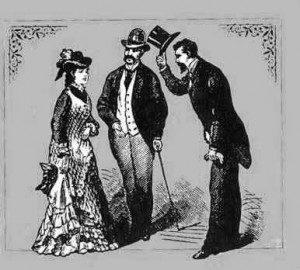 While concern for our conduct toward others is down, the assertion of our Constitutional rights is up.  There is also a serious increase in negative political ads and the use of vulgar language.  We do business with little thought for others.  What happened to the time when a man’s word was his bond and you could do business on a handshake?  Some say civility is in a permanent state of change.  On the contrary, the basics stay the same indefinitely, and have since the earliest times of recorded history.

This is no argument for a return to a less advanced technology, but rather a simple recognition of the many stresses present-day humans have to endure that lead to poor attitudes and shortened tempers.  Indeed, a far more significant stress on interpersonal relationships is the increase in population in this and most countries.  In the past, people sometimes went a long time without seeing other humans, or were restricted to interacting with only a very few persons. This scarcity of societal contact inherently increases the value of other persons and inclines individuals towards appreciating others.

In stark contrast to this is the all too frequent frustration of having other people crowding our lives on the highways as we drive, on lakes as we boat or sail, on city sidewalks, in restaurants and any number of other public places.  This crowding from so many people (especially in cities) causes us to appreciate each other much less, and consequently to relate to people in a less kind fashion.  It is these stresses, along with the general decline in societal morals that has led to such things as “road rage” where rudeness goes past the boundaries of crudity into the realm of unlawful acts.

Therefore, we must first recognize the raw logic that demands the exercise of common courtesy, and then move on to the art form that makes it more than a perfunctory exercise.  Good manners are an essential ingredient in a healthy society because they smooth relations with the people with whom we interact and prevent a host of problems.  More than this, good manners make life more pleasant and enjoyable.  Such courtesies actually honor God by giving respect to that part of His universe that was created in His image: humans.  When good manners are practiced sincerely, the respect that flows outward creates self-respect, something the Socialists and others of their kind try to generate through false and demeaning government-sponsored programs and clichés.