One of the greatest venues for empowering girls and women is completely overlooked by the Progressives. Of course, given the nature of the event, it’s no wonder they shun it like a vampire to holy water.
From the Infogalactic entry: “Being a rodeo queen requires skills in western style horse riding, public speaking, rodeo knowledge, appearance, and personality. Rodeo Queens spend their time professionally representing their title at various rodeos, parades, public events, television interviews, radio interviews, school events, and charity events.”
Just take a look at that list. Most Rodeo Queens have more facetime with the public than just about anyone not a mega pop star. They influence thousands of people in just a year. 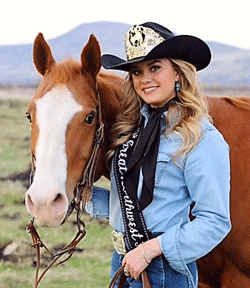 And look at their skills just to be in the running: “The most common major categories are appearance, horsemanship, knowledge, and personality, with a number of subcategories.”
Anyone who has worked with animals at all has a clue just how demanding that is. Anyone who has worked with horses is dialed in: this is not an easy pageant. The girls involved are hard workers who have, by the very nature of their interests, dealt with hardship, heartache, and disappointment. And each have risen to the challenge and overcome them to show up and compete. The winners become the queens and are expected to keep improving and maturing. Most pageants have a number of runner-up positions, attendants and the like, that accompany the Queen in various public outings.
One of the biggest jobs these girls have is starting a rodeo. The ceremony is simple, the announcer calls out the girls’ names and positions as they ride out and show off their horse riding skills in front of bleachers of people who know the business just as well if not better than the girls do and those that are there for the fun. As they ride, the girls are under scrutiny. They aren’t being rated by judges but under the worse sort of appraisal: public opinion.
The girls handle the pressure with aplomb. They roll with the situation. They adapt and overcome. Smiling, their dress and makeup done to be pleasing to the eye without being garish or beyond the bounds of modesty, they ride.
And they do it over and over again, year in and year out, learning how to handle failure and success doled out by Fortuna’s capricious wheel.
If empowering women means anything, it means that.

"The Rout of the White Hussars" by Rudyard Kipling