I’m not going to sort through what’s myth and what’s factual about Saint Nicholas. As the years passed, his legend grew. Instead, I’m going to take Herodotus’ approach and repeat what I’ve found, as is.

Even as a young lad, Nicholas was busy doing good.

The first miracle attributed to him happened when he was still quite young. On his way to his teacher’s, he saw a woman with a withered hand. Out of pity, he stopped, prayed over her to God, and made the sign of the cross. Her hand was restored to full health. 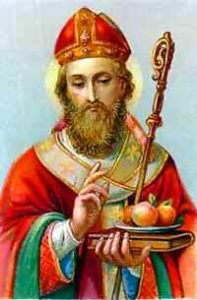 When he set sail for the his pilgrimage to the Holy Land, Nicholas boarded an Egyptian ship. He dreamed that a great storm was headed their way. In the morning, he warned the disbelieving sailors of the impending storm. But he told them not to worry because “God would protect.” As soon as he delivered the news, the sky darkened as the foretold storm rolled in. Soon, the ship was seized in the fury of a sea squall. The sailors lost control of the ship and they tried to secure it as much as possible. One sailor fell from the rigging to his death on the deck. They begged Nicholas to pray for them. As soon as Saint Nicholas prayed, the storm lost its force and dispersed. He then prayed over dead sailor who got up like he had been asleep and went to work without pain.

While in Jerusalem, Nicholas went to visit the only remaining church there, the Church of the Room of the Last Supper on Mount Zion. The heavy doors were locked but as he approached, they opened up without a human hand. Nicholas dropped to the earth in amazement and praise.

As Bishop, he would travel the countryside, casting out demons. That’s right, Saint Nicholas, a book of the gospels in his left, right hand at the ready to bless the afflicted, went around casting out demons from people, sometimes multiple people at once.

He was so successful as a roving exorcist, people asked him to drive out the spirits infesting the old shrines to the old gods. The people claimed these demons were afflicting them and causing contention. Bishop Nicholas cast out the demons and cast down the old shrines whenever he found them thereby bringing peace to the people.

His fame grew and more villages asked for his help. One village asked Nicholas to drive an unclean spirit out of a cypress tree, which he did by swinging an axe. It sent the demon screaming away. Another village ask for him to cleanse a well. Again, Saint Nicholas drove the demons out.

One of his most famous miracles while he was Bishop happened during a great famine. A butcher lured three young boys into his shop where he killed them. The butcher dressed them and put them into barrels of brine to cure with the intent of selling them as ham. Saint Nicholas was in the area to minister to the poor and starving when he became aware of the evil deed. He prayed over the barrels and the three children were restored to full life.

His most famous act, though, is what set him on the course to becoming the Saint of Christmas.

In his sphere of influence, Bishop Nicolas learned about a poor man and his three daughters. This man didn’t have enough to pay for the dowry for even one his daughters, making marriage impossible. Not being able to marry, the daughters were destined for a life of menial labor and either would turn to prostitution or considered prostitutes. The Bishop, not wanting to bring shame to the family, in the cover of night threw three bags of gold into their small cottage, enough money for each girl’s dowry. Some legends have it he did it three nights in a row, others say he did it the night before their birthday. One variation has him dropping the bags down the chimney where they landed in the stockings hung out to dry. Regardless, it was this act that started associating the Saint with giving gifts in secret at night.

In the next part I’ll recount some of his later miracles and acts, quite a few of them happening after his death.