Nicholas took his responsibilities as Bishop very seriously. Seeking guidance through revelation. he went up into the mountains to pray unto God for renewal. As he was praying, a river broke forth from the mountain. Taking that as a sign, he went back to his ministry, convinced his service in loving his people was pleasing to God.

Dragons were said to fall under his influence. One had been terrorizing a town and the people begged Bishop Nicholas to intercede. Under Nicholas’ blessing, the dragon was tamed and troubled the town no more.

Even in his later years Saint Nicholas was active in doing good.

He was known for giving gifts in secret, especially for leaving gold coins in shoes. Coupled with the legend of him leaving dowry for the three girls, this laid the foundation for Saint Nicholas to be associated with gift giving.

Once, a sailor on the Black Sea was caught in a fierce storm. As the sea overturned his boat and started to pull him under, he called out to Saint Nicholas to save him. Back in his home town of Constantinople, the sailor’s friends thought they heard the man calling out from inside his own house. Confused, since they believed the man to be on a voyage, they broke into his house to see who was calling out to the Saint. They found the man still calling out to Saint Nicholas. He was drenched from head to foot and water was pooling on the floor around him. He had been lifted straight out of the sea and returned to his house.

A rich man who had spent years amassing his wealth through dishonest means also had given much to the church in an attempt to offset his nagging guilty conscience. Finally, his dishonest actions caught up to him and the authorities were tracking him down. He rode away in a hurry, and as the net tightened around him, he spied a Saint Nicholas Chapel across the Danube from him. He vowed he would donate the cost of the horse if he escaped. The merchant got across the river and rode to the chapel to fulfill his promise. He carefully counted out the money and left it on the altar. His horse wouldn’t move. The man returned to the altar and counted out more coins. This time, the horse allowed the man to led him away.

Saint Nicholas worked his miracles as he saw fit. A rich man, knowing Saint Nicholas had a reputation of being a protector, had commissioned an image of the saint and placed it in his house. He demanded that the saint would watch over the man’s possessions, and if he failed then the man would beat the image. One night, while the man was away, thieves broke into his house and carried off the man’s riches. When the man returned, he was so angered he beat the image, damaging it greatly. Saint Nicholas appeared to thieves, battered and bruised, dressed as the icon in the rich man’s house. He accosted the thieves and asked them why he was being beaten for them. He told them to return the stolen goods or God would curse them and they would hang. Fearfully, they asked why he was doing this to them. Saint Nicholas said he was the servant of Jesus Christ and he was suffering for their sins. The thieves returned the goods to the rich man and explained what happened. The thieves repented of their wicked ways and the rich man was converted becoming a follower of Christ. 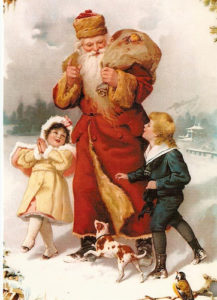 During the wars between East Turks and the Kievs of the 11th century, a Polovtsian Turk was captured. His jailer and him came to agreement that the captured man would pay a certain amount of ransom. The man had no money with him, so they both went to a nearby church so the man could swear on an icon of Saint Nicholas and his jailer set him free with the command to return with the ransom. The man returned home, laughing at the naive jailer. At home, his friends and family told him he didn’t have to pay the ransom. He agreed and went on his merry way. After some time, Saint Nicholas appeared to him and reminded him of his oath. The man ignored the saint. A short time later, Saint Nicholas appeared again and this time threw the man from his horse and reminded him to pay his debt. Still, the man did not. When the man was at a large gathering of other Polovtsians, Saint Nicholas appeared again and threw him down then started beating on him. His companions were frightened of the invisible assailant. His family took him home and, afraid of being the next to be beat up by an unseen enemy, begged him to pay his debt. He took two herds of horses, the smaller he donated to the church were the icon of the saint resided and the bigger he gave to his former jailor with an explanation of all that had happened to him. Surprised at the repayment, the jailor thanked Saint Nicholas for the blessings.

One last story about his gift-giving. There was a monastery in the vicinity of Constantinople where the monks had a taken a vow to rely on the charity of strangers. It wasn’t near a major road, so often the monks had very little. They’d pray to Saint Nicholas when things were really bad. One day, a traveler found a man lying dead near the side of the road not far from the monastery. Taking pity on the dead man, the traveler brought the body to the monastery and asked the monks to bury the man. The traveler gave the monks enough to cover the burial expenses and more for the monks to take care of their own needs. A year later, the traveler found himself in the same location. This time, there was a small boy standing there. He told the traveler that he was looking for his father who had last been seen near there a year ago. The traveler took the lad to the monastery. The monks, on hearing his story, dug up the coffin so the boy could take his father’s body home. The grave held no coffin but instead it was filled with gold and silver coins. Puzzled, the monks went to ask the boy if he understood what was going on, but the youngster had vanished. That night Saint Nicholas appeared to the Abbot and explained because the monks and the traveler had taken pity on a poor, nameless man, the Lord had blessed them through an angel disguised as the boy.

The modern name of “Santa Claus” is a garbled, side-translation, cultural telephone game of Saint Nicholas, a man dedicated to serving Christ through acts of charity during his life and beyond.

So the next time you see the jolly fat man in the red suit, think of the real Saint Nicholas and know God has always had mighty miracle workers working for Him.

Bacteria Soup For Your Garden

Salon dot com: The US Was Founded On Gun Control