Editor’s Note: St. Hilary of Poitiers was an early church father, and is considered a Saint by the Roman Catholics, Eastern Orthodox, and several of the more liturgical Protestant churches. He lived and worked in the first half of the 4th Century. Note that he used the Septuagint for his work, and that source numbers many of the Psalms differently than most of our Bibles. In the Septuagint, he is discussing Psalm 130, but it will be Psalm 131 in most Bibles. This also speaks to why he refers to the “Greek” in the sermon, as the Septuagint was the Greek translation of the Old Testament. 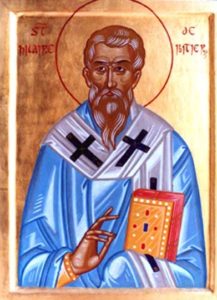 O Lord, my heart is not exalted, neither have my eyes been lifted up.

Hymn: Nothing But The Blood Of Jesus