“Who is among you that feareth the Lord, that obeyeth the voice of
His servant, that walketh in darkness, and hath no light? Let him trust
in the name of the Lord, and stay upon his God.” ”
—Isa. 50:10

The Bible has a message for every life, no matter what its duty or test or need. The vitality of the Bible is indestructible. No condition nor 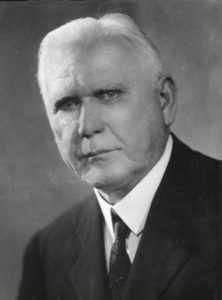 When through the deep waters I call thee to go.
The rivers of sorrow shall not overflow,
For I will be with thee, thy troubles to bless.
And sanctify to thee thy deepest distress.

When through fiery trials thy pathway shall lie,
My grace, all-sufficient, shall be thy supply,
The flame shall not hurt thee â€” I only design,
Thy dross to consume, and thy gold to refine.

There is one word more. What are we to do when the trouble is on? The next tells us. “Who is among you that feareth the Lord, that obeyeth the voice of His servant, that walketh in darkness, and hath no light?” What is that one to do? Here it is: “Let him trust in the name of the Lord, and stay upon his God.” There is your anchorage. It is not anywhere else. You will grope and flounder and be in the ditch anywhere else, my friends. Some of you have been called to pass through deep troubles, fiery troubles. You will fatally err if you go anywhere else but to God. There is the anchorage. If you have an anchor for a ship, you do not keep the anchor in the ship, when you need to anchor the ship. You take the anchor and put it down out yonder. So our anchor is not within us at all. We are anchored to Christ. Listen to His prom-ises: “Because I live, ye shall live also.” And again: “I will never leave thee, nor forsake thee.” And again: “And, lo, I am with you alway, even unto the end of the world.” That anchor will hold. And if you do not stay upon God in the dark and trying day, you have serious cause to suspect whether you have ever really trusted Him at all. Trust Him in the dark day, because God’s grace and promises are designed for dark days, just as those great ships are built yonder to withstand the stoutest storm that ever drives the seas. Why should you trust God on the dark and cloudy day? Because such a faith will glorify God. With your submission to God’s will, patient, meek and uncomplaining, with your clinging trust, like Job, saying, “I will trust Him, though He slay me;” saying, “Whatever comes, I will follow Him the best I can, whatever the vale through which I walk.” And if you will trust Him like that, you shall be a blessed witness for God.
Why are you to trust Him on the dark and cloudy day? Because it won’t always stay dark and cloudy, thank God! Sure are His promises that “the day will break and the shadows flee away.” “Weeping may endure for a night, but joy Cometh in the morning.” “For our light affliction, which is but for a moment, worketh for us a far more ex- ceeding and eternal weight of glory.” It won’t stay dark. There comes a sweet, fair morning, tinted and glinted with all the favor of God, and you are to look forward to that morning, and cling to Him, and go your way, knowing that all shall be well.
The hour passes in two minutes more. Tell me, was this message for somebody here to-day? Oh, receive it and follow it! Is some heart here to-day perplexed and bedarkened? Take the text, I pray you, and go with it, making it your own. Take one step at a time, and then take another step, and then take another step, and He will bring you into the fair day, and you will sing with the poet:

So I go on, not knowing;

I would not know if I might.
I would rather walk with Christ in the dark

Than to walk alone in the light.
I would rather walk with Him by faith

Than to walk by myself with sight.

Stay yourself upon Him to-day, and from this day forward cleave ever to Him with unhesitating trust, and then may you sing with the psalmist that the Lord will perfect that which concerneth us, because His mercy endureth forever.
THE CLOSING PRAYER.
Our blessed Heavenly Father, bind the word that each of us needs to hear and heed upon our deepest heart. May we walk like we ought, in our day and generation, for the glory of God. May our tempers and deeds be always such as shall cause the people to take knowledge of us that we are Christ’s, and that we delight above all else to do His holy will. May we always have that mind which was in Christ. And, O, by example as well as by word, let us glorify Christ continually, each of us, till life’s day is done. Bring the one that is in the darkness here to-day just to stay all on God, and everything shall be well. Teach us that no matter what the darkness that may come â€” the trial, the tears, the disappointments to beat us into the dust, and no matter what the fearful surprise, the sore wrenching of the heart, the awful bitterness of spirit, no matter what- God’s grace is and shall ever be sufficient for us. And let all these men and women say: “We will trust Him, though He slay us, and today we will cling to Him with new trust and new hope and new passion and purpose in obeying His will.”
And now as you go, may His grace fill your every heart and His wisdom guide your every step, forevermore. Amen.

Hymn: Be Still My Soul

Taken from “Beyond Is Genesis History? Vol 2 : Life & Design.”

Editor’s Note: Last Redoubt comes back after a couple of weeks without posting. It’s been a

Editor’s note: The following sermon by Christopher Newman Hall is extracted from The World’s Great Sermons,

When the sky grows dark, and storm clouds appear on the horizon, we naturally call upon