Author’s Note: I wrote this before Trump announced the so-called temporary re-opening of the government. Honestly, I usually wait a few days after Trump announces things to see how they play out, but at this point, it looks like a bad move. Still, my comments still stand.

Ok, as we are well over a month into the Government being “shut down,” we can take a few minutes to reflect.
First, I figure most normal people who work for the Federal Government are just regular old folks. I hold no animosity to them for anything in particular. They were told that getting a government position would provide good pay, job security, benefits, and a nice pension. Fair enough. I suppose very few actually saw it as being any different from any other job in the marketplace. They go to work, get a pay check, insurance, etc. It seemed less volatile than a job with some start up company, so they took it when offered.
At the same time, those paychecks, benefits, and pensions are all funded by the tax money extracted from other Americans. So it really is not the government providing all those salaries and perks – it is you and me. We give our hard-earned money every year so that these folks can have all these things. Make no mistake, either, in thinking that “well, someone  has to do it.” They tend to make a higher salary with better perks than most of the rest of us do, just for doing the same job. So a clerk in the government makes more money than a clerk in private business (usually), but it is that private business clerk who is helping to fund the government dude’s salary. That just seems a bit off. 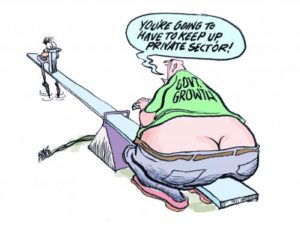 Second, I do feel bad about the majority of government workers who are not getting paid. They did what they were told was the best option for their future and now find themselves in financial trouble, as they are not getting paid. (Yes, I know that most of the government is still functioning. I am just referring to that subset that is not getting paid). Should they even have these jobs? Of course not. They should be doing something productive with their skill set, rather than wasting tax payers’ money, but that is a broad picture look. At the individual level, we do have some people who are suffering. I know some folks in this position who have found other jobs (some part time, until the crisis is over; other have moved on to other full-time positions, which I see as a positive in the long run). I know of some who have decided to take this opportunity to go back to school and work on a graduate degree, which they think will help their future prospects.
Third, this “shut down” has not really bothered me in any way, personally. If something has not worked for a month, and I am not missing it, I don’t really see why it is necessary. If nothing else, we are seeing that much of what the government does is simply wasteful and useless. I can still drive down the highway, buy fuel for my car, groceries for my family, go to work, earn my paycheck, go to church, spend time with my family. Nothing has changed.
One of the more observable trends in recent decades has been the growth of bureaucracy. This is not limited to government, of course, but  has infected many institutions in our country. From the universities to businesses, organizations have been moving toward a top-heavy organizational model, where departments and offices have come to exist only to exist, without providing any measurable value to the institution. They perform functions that are not only non-vital, but frankly, serve no real purpose whatsoever. Those same departments and offices also suck up much of the financial resources that these institutions have to operate. How much more efficient would all of these places be, if those useless jobs and departments were simply cut? Even with no additional money coming in, the organization would be streamlined to perform much more efficiently, and be able to return to a focus of why they are there in the first place.
The government “shut down” is proving that this is absolutely true for the current situation. It is time for these government workers to find alternative employment on a permanent basis. We simply do not need them taking away the tax money we provide. And from my perspective, this is only the first step. There are many others in government work who need to do the same. The overall structure of the Federal Government needs to be streamlined, pared down, and returned to a Constitutional existence, rather than the self-supporting behemoth it has become.

Hymn: Up From The Grave He Arose