For a long time, the counter-culture has used the phrase “Speak truth to power” when they confront those holding to traditions, are fighting for their existence, or are just in a position to exercise lawful authority. According to Google Trends, the use of this phrase was high from 2004 (the earliest data available) and decreased towards the end of President George W. Bush’s second term. I believe we will see an increase in its use since Donald Trump was elected President.
The origin of the phrase is usually ascribed to the book from the Society of Friends, “Speak Truth to Power: A Quaker Search for an Alternative to Violence.” This book was published by the American Friends Service Committee against the Cold War. It is likely that the civil rights leader Bayard Rustin coined the phrase.
The phrase implies that any and all power can only exist dependent on lies. This phrase leaves no room for power that is not based on lies. Do some power structures build on a foundation of lies? Absolutely. But there are some that do not.
Would those who use these words speak them to a power they do not disagree with? Of course not! Witness the decline in search from 2007 until now.
Is there a better phrase that brings us more in line with Christian Truth? I propose, “Speak truth to evil.” 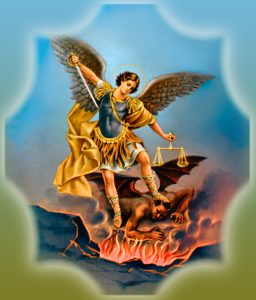 I first heard it from a talk show host in Dallas. It was also used by Congressman Phil Gingrey about Ronald Reagan:

[O]n the foreign front, Reagan was the first President since 1917 to ignore the bureaucracy and speak truth to evil. Eight years later, the evil empire was crumbling, and the Cold War was over.

Does all power need truth spoken to it? There is one Power above all. Does God need Truth spoken to Him? By no means! If the saying does not work in the ultimate case, perhaps it needs reexamination.
Which phrase should we be using? Not all power needs truth spoken to it. Power that is used for good is on the right track already. Power that is used for evil most definitely needs a strong dose of truth. Even powerless evil needs truth spoken to it. When your child says, “I hate you!” his powerless protest is evil and needs to be countered with scriptural truth. Even Michael, the archangel, spoke truth to evil when he said, “The Lord rebuke you!” to Satan.
Let us be precise in our speech so that we may be best understood.

The Most Difficult Command

Britain and World War I