As the Twentieth Century began, the European world began to prepare for a major war, which was commonly expected. Literature from the period fictionalized German invasions of England, and other theoretical combative scenarios, though Germany was not always the “bad guy” (James, p. 334). In any event, British society took on a military bearing, as groups such as the Boy Scouts drilled military customs and thought processes into young men’s minds. Governmental officials, especially those in military service, used the social situation to expand expenditures for military concerns. While they did fear that a real conflagration could ensue, they took advantage of public fears, as well. What stoked these fears was not the impressive German army, but their growing navy. While it is debatable that the German Navy could have ever achieved their goals (and British fears), the mere threat was sufficient to motive a major change in British policy and cultural attitude (Cf. Lambert’s Sir John Fisher’s Naval Revolution). “The first decade of the [20th] century saw immense alteration. Friendships cooled, enemies became friends, and newcomers entered the opposing camps. Of this there were many causes, but most of them may be traced ultimately to the prodigious growth of the German Empire, which is the most striking phenomenon of Europe in [their time]” (Turner, p. 19).
The consequence of this situation was a continued buildup and overhaul of British military equipment, policy, and strategy. The threat of a viable German Navy frightened British interests regarding overseas possessions and commerce (James, p. 336). While James argues that Fisher’s greatest achievement was pushing through the development of a new class of battleship, the Dreadnought, Lambert argues that Fisher’s revolution was really more one of strategy, by focusing upon the use of submarines and torpedoes, rather than conventional naval warfare. Both of these activities increased production of shipbuilding and impacted the economy.
Connected with the evolving military policies was a changing foreign policy (James, p. 337-38). Enemies for centuries, France and England came to terms and became allies. They supported one another, consistently, for the first time. Besides France, overtures were made to Russia and Japan, further strengthening British diplomatic ties, though British politicians never really trusted Russia. All of this allowed Britain to focus on Germany, which was quickly being recognized as the most likely opponent in a future, and increasingly imminent, war (James, p. 339). The diplomatic ties to France, and other nations, led to British intentions to support them in the event of a German invasion. These plans were kept secret, though. “The relations of England and Germany attracted little attention until the beginning of the twentieth century, when the wonderful progress of Germany, the industrial competition which resulted, and the immense power which she was gaining, caused increasing disquietude among British leaders” (Turner, p. 21). “In the Edwardian period, it was civil society which required regeneration, and it was through, and indeed for the army that the process of renewal was to take place. Before, the army had been domesticated; now, society was to be militarized” (Summer, p. 112).
Public opinion was fragile, and it was feared that a government that proclaimed that peace was of paramount importance would be shunned, if it was learned that they were openly planning for war (James, p. 339). The fear of invasion would prompt the populace to support military expenditures and strategy, but events in other places did not elicit the same response. The danger of a German naval invasion in particular aroused great public consternation. To keep these secret plans from becoming public knowledge, much military spending was financed by dominion governments (James, p. 340). This cooperation was vital for British strategy (James, p. 341).  They could finance the ships and other military expenses, reaping the benefit of British support and protection.
Of course, this increase in military expenditure only exacerbated the growing contention between Germany and Britain (James, p. 343). For several years, the two nations warily circled one another, hoping that the other could be dissuaded from fighting the other, if a war did break out. The fear was that if one or the other of these two major powers stayed aloof, the war could be limited. If both were involved in fighting, it would spread and become a major war. When the Balkan Crisis occurred in late June 1914, it aroused little worry in England. Even as war approached and became irresistible, the common folks in England seemed nonplussed (James, p. 346). However, there was a British militaristic streak. “For an island with no system of conscription, and in which no major military engagement had taken place for centuries, [to] furnish 1.5 million volunteers for a war overseas, that island must have developed, over a long period, a very wide and pervasive  range of military or militaristic modes of thinking; and these must have been different from the more conventional and obvious forms of militarism- conscription, garrison towns, duelling manias and the like-which  existed in other European societies at this time” (Summers, p. 105).
Britain did try to stay removed from the conflict, hoping to keep it contained in the Balkans or to the east. When Belgium was invaded by Germany, England was forced to intervene and adhere to treaties with Belgium, France, and Russia (James, p. 347). This German infraction on Belgium also gave British authorities a cause upon which to build public support. A Germany that possessed Belgium and northern France would be a Germany that could more readily attack and harass Britain (James, p. 347). By August 1914, the British public and the dominions were all supportive of British intervention into the war (James, p. 349). 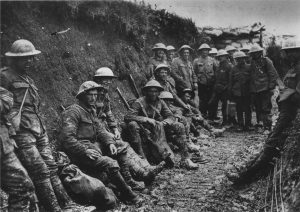 Speaking Truth to Whom, Exactly?