Of all the commandments which are enjoined upon us, the Sages consider the commandment to kivvud av v’em, honor your father and your mother, to be the most difficult to fulfill and to fulfill properly.  In fact, according to some of our Sages, the command is considered nearly impossible to fulfill properly.  Beyond the practical challenges of fulfilling the command properly, people seem to have a profound difficulty with feeling indebted to others. Man by his nature seeks to be independent and finds the need to be appreciative and to express that appreciation as an extremely constricting experience.
In the Talmud (Avodah Zarah 5a) the Jewish nation is described as “an unappreciative people, children of unappreciative people.”  When God said, “Who can assure that this heart should remain theirs to fear Me and observe all My commandments all the days?” (Deuteronomy 5:26), the Talmud tells us that they should have responded, “You assure it!”, but they did not request this from God because they did not want to feel indebted to Him.  Parents are no exception.
The Talmud also teaches that when the nations of the world initially heard of the first two commandments  – that God said, “I am the Lord your God” and “You shall have no other gods before Me, etc.” (Exodus 20:2-30) – they claimed that He had His own personal prestige in mind when He commanded these two imperatives. But when they heard about the fifth commandment – that we must honor our parents – they came to realize that His intent in giving all of the commandments was to expose man to authentic and objective truth.
The honor due to parents is similar to that which the first three commandments render to God. We must acknowledge who our parents are, not do anything that might cause them to be disgraced or degraded, serve them unselfishly and not for the sake of an inheritance or any other ulterior motive, and not swear in their names. One must honor his parents in all possible ways as an expression of his thanks to them, for there is no character trait more despicable in the eyes of God and man  than lack of gratitude.
Although the commandment to honor parents is based on the concept of gratitude, even when the parents give their children nothing, the obligation to honor them is in no way diminished. We are commanded to honor our parents as the Lord your God commanded you. While the children of Israel were wandering in the desert, God Himself took care of all of the needs of His children, with almost nothing coming from one’s biological parents. Despite this, however, God commanded the Jews of the time to honor their parents. 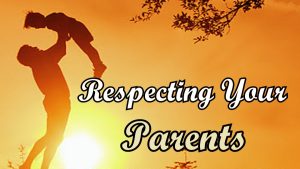 Respect for our parents is a cornerstone of faith in the entire Torah, for our tradition is based on the chain dating back to Abraham and Sinai, a chain which links the successive generations of parents and children. Thus the fifth commandment becomes a guarantor of the previous four.
For those who believe in Darwin and his theory of evolution in all its variations, every successive generation is more refined and developed than its predecessors.  Why then should the young honor the old? However, in our tradition, every earlier generation is one generation closer to the Sinai experience and the source of our uniqueness as a people. In other words, parents are the real “missing link.”
Since our belief in God is based on the testimony of our antecedents who personally witnessed the Exodus and the giving of the Torah, we must therefore honor and look up to them. Thus, one must strengthen his faith in God and his honor of parents for each one reinforces the other.
The Sages underscore this point:

One’s children are not merely the extension of his physical continuity; they are links in his spiritual chain who serve as a conduit through which the tradition is passed on to the future. If children fail to honor and obey their parents they can wreak physical and spiritual havoc, and even death, to the Jewish nation.
As Moses our teacher taught, if we do not follow the Divine imperative, we will not enjoy lengthy days upon our own land, for we will be eradicated from residing upon it (Deuteronomy 4:26). It is this that the Torah teaches regarding honoring parents, “In order that you merit lengthy days upon the land’ (Exodus 20:11).  Only through fulfilling this command will we, as a nation, be entitled to safely remain in our land.”

Although our parents are generally one’s connection to his spiritual heritage, one must honor them even if they have provided him with no spiritual guidance whatsoever. The entire congregation that was physically present at Sinai, both parents and children, heard the Torah directly from God or Moses. Children did not need to receive the tradition from parents; they experienced it firsthand. Nonetheless, they were enjoined to honor their parents.
Likewise, all of us, whether or not our parents taught us the basic beliefs in God or His Torah, must honor our parents as the Lord your God commanded you. Although honoring parents is a form of expressing thanks for all they do on our behalf, we may never assume the attitude that since they do nothing for us, or even shame, humiliate, or embarrass us, we are no longer obligated to honor and obey them.
The Scriptures promise length of days to those who honor their parents. Parents and children often live together for many years. As the parents age , it can become more and more difficult for the children to take care of them. Sometimes, as a result, the children become frustrated from the task. Therefore the Scriptures teach us that one’s longevity is linked to the way he treats his parents.
One who views his parent’s longevity as an imposition that cramps his lifestyle does well to realize that his own years are related to those of his parents. The Scriptures therefore promise that all the time “lost” in tending to the needs of one’s parents and honoring them will be made up, for its reward in this world is “so that your days may be lengthened.”

Give Me Liberty or Give Me Death

Speaking Truth to Whom, Exactly?