St. Nicholas was born in the year 270 AD to wealthy parents. He was very involved in the Church at an early age and always observed the Wednesday and Friday fasts. His parents died as a result of a widespread infectious disease. This left the orphaned Nicholas to live with his uncle, also named Nicholas, who was the bishop of Patara. His uncle Nicholas tonsured* him a reader and later ordained him to the holy priesthood. After inheriting from his parents, he gave generous gifts to those in need. (So yes, there are gifts involved, but not in the same way Santa gives gifts.)
Before 313 AD, it was illegal to be Christian in the Roman Empire, even though thousands of citizens were Christian. The Emperor Diocletian, showing that he would not waiver in his faith, imprisoned St. Nicholas for his faith. He was eventually released once Constantine had gained power. By 325 AD, Fr. Nicholas had become Bishop Nicholas of the city of Myra, also in what is now southeastern Turkey. In 325 AD, St. Constantine, the emperor of the Roman Empire, called for a gathering of the bishops of the Empire to come together and to discuss issues that the Christians were facing. In this meeting, an early heretic of the Church, Arius, was presenting his view of the theology of the Church. 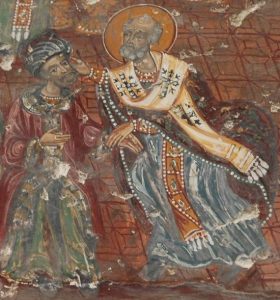 St. Nicholas, in outrage of listening to his faith being violated by the heretic, is said to have gone up and punched Arius in the face. For this, St. Nicholas was stripped of his bishop robes and thrown into prison because it was illegal to strike someone in the presence of the emperor. Overnight St. Nicholas repented of his actions, while not repenting of his views, and was visited by Christ, who gave him both an omorphorion (what the bishop wears over his shoulders) and the gospel. He stayed up the rest of the night reading the gospels, and in the morning St. Constantine freed St. Nicholas because he wasn’t in his shackles and was dressed as a bishop.
Another important story about St. Nicholas’ generosity may be why he eventually became morphed into Santa Claus. There was a man who was once wealthy, but had lost most of his wealth. This man had three daughters near the age of marriage, but could not offer a dowry for them to be married to good men. This father feared that his daughters would become slaves. St. Nicholas heard of this family and coming in secret by night, he threw a sack of gold in the window and it landed in a shoe or stocking. This mysteriously would happen before each daughter was to be wed. For the last daughter, the father saw that the secret donor was St. Nicholas. St. Nicholas begged that this man not share the things that had happened.
The Eastern Orthodox Church remembers St. Nicholas on December 6 each year.
This article adapted from a posting at this site.
*Tonsuring is part of the service where a Bishop sets a man apart to serve as a reader in the Orthodox Church. Specifically, it refers to when the Bishop cuts a small portion of hair from the four sides of the head of the one being set apart.