Editor’s Note: We are pleased to offer you this cogent review by our good friend, The Dark Ninja of Mockery and Twin Red Shadow of Justice. Yeah, that is his name, and don’t you forget it. To be clear: Spoiler Alert! 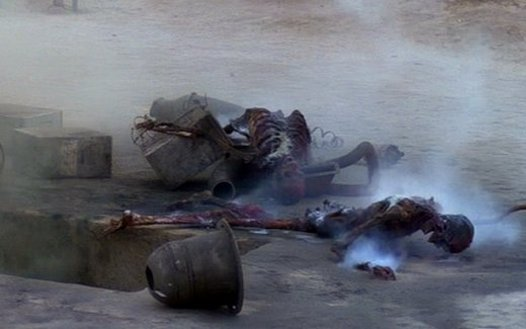 Remember that scene in A New Hope, when Luke goes back to the farm and finds the place a smoking ruin, with the horribly mutilated, crispy barbecued remains of his loved ones strewn across the porch like charred garbage?
Star Wars: The Last Jedi is exactly like that.
Except this time there’s no Obi Wan to take you away on an adventure, no wider world to take your first step into, no princess to rescue, no heroism, no magic, no hope, and no point.
The cinematic equivalent of riding a rickety bicycle down a mountain without a seat, The Last Jedi is a terrible, awful, no good, very bad film made by people who hate you and who want to do to your childhood memories, your heritage and your culture what the stormtroopers did to Aunt Beru.
They even tell you as much in the movie: “let the past die, kill it if you have to“. This is a movie by and for the same sort of people who tear down Confederate statues and get “dead white males” erased from universities. It is the anti-Star Wars, as if millions of neon-haired social justice warriors suddenly REEEEEEE’ed in septum-pierced glee, and wouldn’t shut up.
How much does this movie suck? Let me count the ways.
1) The Plot
The Force Awakens wasn’t the best Star Wars film, but it wasn’t The Phantom Menace either. Plot-wise, it was a pretty standard J.J. Abrams mystery box, with enough new characters and loose ends to allow a competent writer to develop the story in interesting ways.
For example, who is Rey and where did she get her powers? Who is Snoke? What awesome secret is Luke Skywalker hiding on his mysterious island?
The answers, according to The Last Jedi, are:

Seriously, nothing matters in this movie. It’s as if the nihilists from The Big Lebowski were mistakenly hired as scriptwriters, got hit on the head, and then turned in a screenplay that’s more aggressively stupid than a cage fight on a shortbus.
2) The Alien Titty Milk
Hey, kids! Have you ever wanted to see Luke Skywalker, the most earnest hero in the galaxy, portrayed as a bitter, homeless old coward who hates Jedi stuff and likes nothing more than guzzling alien lactate from a weird-looking muppet who leers lasciviously as he messily chugs her boob juice? Whaddayamean, “no“?!?
Yes, The Last Jedi takes a gigantic, steaming bantha-dump all over Luke, formerly the single most optimistic character in the entire franchise. This isn’t the cheerful, can-do Luke you remember who blew up the Death Star, took out an AT-AT singlehandedly, killed a Rancor and brought his dad back from the Dark Side.
This Luke is more like Rip Torn’s character from Dodgeball, minus the humour and wrenches. And then he dies.
The other legacy characters don’t fare much better. Yoda’s ghost turns up to encourage Luke to burn down the Jedi sacred texts. He may or may not have been twerking, smoking a fat blunt and saying “AYYY LMAO” while doing so. Carrie Fisher, who looks 90 years old in this movie, flies through space without a spacesuit on for some reason. Han Solo was already pointlessly killed off in The Force Awakens, but a deleted scene in The Last Jedi has a diverse bunch of multi-ethnic, gender-nonconforming Ewoks breakdancing on the illuminated disco floor Kylo Ren had built over his grave while Bill Nye sings a song about space dildos.
3) The Feminism
Star Wars used to be unashamedly boyish fun, and as we know, feminism is the haunting fear that some man, somewhere, may be happy. The new Star Wars is run by an executive team of fugly feminists and simpering soyboys, so it’s all about grrrrl power, and it’s as boring as you’d expect.


The #Resistance is (incompetently) run by women, including Laura Dern as the scowling, purple-haired Admiral Tumblr. Rey continues to be the most special snowflake in the universe for no apparent reason other than the fact she has a midichlorian-powered vagina. Leia is no longer a tomboyish, spunky space princess, she’s more like a sallow, sour-faced spinster who palpably can’t wait till booze o’clock.
And we get to meet Rose Tico, a 5ft 2, 240 pound Chinese dumpling who looks like Babe from Babe.
The men in this film are mostly disposable props to show how awesome the girls are. Luke Skywalker is ruined, presumably to make Rey look good. Poe Dameron is portrayed as an arrogant idiot for doubting Admiral Tumblr and her refusal to share her plan, or admit she has a plan, to her senior officers while they run for their lives. Poor Finn is forced to go on an extended shaggy dog subplot with Not-So-Little Buddha and then kiss her massive, prawn-cracker-stuffed face.
What’s especially weird about this estrogen-crazed inanity is that the original Star Wars trilogy already accurately portrayed a strong, independent feminist character, but for some reason Jabba The Hutt isn’t in this movie.
4) Star Wars Is Dead
And not even in a force ghost sort of way either. This is the end, it’s now clear Star Wars is a zombie franchise, an unholy lumbering abomination stitched together by marketing committees and animated solely by an unquenchable hunger for money. Even after the relatively crappy prequels, Star Wars used to be a cultural touchstone, a shared mythology that somehow transcended its often-goofy dialogue and George Lucas’s dollar-grubbing habit of slapping the brand on everything from toothbrushes to tape dispensers.
After The Last Jedi, Star Wars is just a movie.
They’ll keep churning out new installments till audiences get bored and move on to something else, but there’s no way back from The Last Jedi. We can’t unsee Luke Skywalker’s milky mortification, Leia’s screwball spacewalk, or being told nothing matters and the good guys are no better than the bad guys. Star Wars is just another soulless product now, an assembly line of cynical-yet-incompetent cash-grabs made by people who hate everything about Star Wars.
George Lucas stumbled onto something magical when he mashed up pulp sci fi tropes, Eastern mysticism, and WW2-inspired battle scenes in the original trilogy, but 1977 was a long time ago in a Hollywood far, far away. With Luke and Han killed off, and Carrie Fisher’s death, there’s nothing to look forward to except more of the same: more diversity casting, more Strong Womyn™, more bland cover versions of the original trilogy minus the charisma and adventure that made it special.
If you’re still tempted to see The Last Jedi, you might want to consider more fun alternatives, such as going to a Harvey Weinstein party dressed as a ficus, do-it-yourself trepanning, or icicle suppositories.