It was a mistake to decriminalize homosexuality.
In the name of tolerance, normal right opinion is no longer tolerated. You can be prosecuted for being insufficiently enthusiastic about 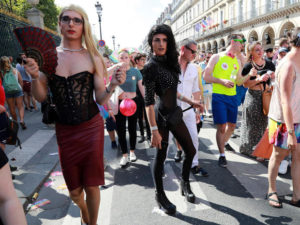 homosexuality. You WILL bake the cake, or else. This is tyranny, and if we are going to get tyranny, I’d rather it be on our side, for once.
Consider this case of a man pretending to be a woman, asking a woman to wax his junk. Surprise! It’s a Willy! In a sane society, we’d prosecute the creep.   He’s making the claim that she’s discriminating against HIM. This happened  in Canada, where the insanity is a little more advanced. She’s a woman, and a Muslim; he’s a weirdo. Hard to say who will win the battle of being more aggrieved.
Even the Pope thinks we’re on the wrong side of history. At least that is the buzz.

Cruz was quoted as having discussed his homosexuality with Francis. “He told me: ‘Juan Carlos, I don’t care about you being gay. God made you that way and loves you as you are and I don’t mind. The pope loves you as you are, you have to be happy with who you are.’ “

God does love everyone, but He wishes us to repent of our evil and turn away from sin. Being happy with who we are isn’t the right answer, whether you are a gay man or a glutton.
We stepped out onto the slippery slope, and we’re going to end up in the ditch. You can’t deny that accepting a little perversion was the wrong thing to do. We’ve leavened the whole batch. There are far more sinister things out there.   There are organizations like NAMBLA, looking for acceptance. There’s strange things going on in the film industry (and getting worse than ever). They are after our children.
This is just one front in the culture war, but it’s one we must win. And we aren’t winning at the moment. It is time to change strategies and start pushing back.

Why All the Gen X Love Here?

The Story of the Malakand Field Force (Part 14)