We here at Men of the West are members of the Gen X generation. As such, we view the world through that perspective, which often differs significantly from that of other generations (Boomers, Millennials, etc.). That does not mean that there are no good Boomers or Millennials, but 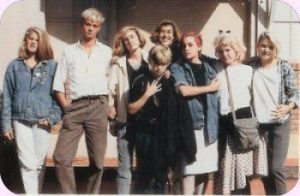 simply that our approach to problems, solutions, and needs will often be quite different (and yes, we realize there are exceptions. There are moron Xers and good Boomers, etc. Those, however, are exceptions, not the rule).
So what is it about Gen Xers? Who are we? According to Strauss and Howe, Gen X is one of the “nomad” generational archetypes, which they describe as:

[being] born during a spiritual awakening, a time of social ideals and spiritual agendas when youth-fired attacks break out against the established institutional order. Nomads grow up as underprotected children during this awakening, come of age as alienated young adults in a post-awakening world, mellow into pragmatic midlife leaders during a historical crisis, and age into tough post-crisis elders. By virtue of this location in history, such generations tend to be remembered for their rising-adult years of hell-raising and for their midlife years of hands-on, get-it-done leadership. Their principle endowments are often in the domain of liberty, survival, and honor. Their best-known historical leaders include Nathaniel Bacon, William Stoughton, George Washington, John Adams, Ulysses Grant, Grover Cleveland, Harry Truman, and Dwight Eisenhower. These have been cunning, hard-to-fool realists—taciturn warriors who prefer to meet problems and adversaries one-on-one…

Of particular note here, we can look at the Xers’ background, world view, and approach to leadership.

Strauss and Howe do directly address Gen X, and describe us thusly:

[They] survived a “hurried” childhood of divorce, latch keys, open classrooms, devil-child movies, and a shift from G to R ratings. They came of age hearing themselves denounced as so wild and stupid as to put The Nation At Risk. As young adults, maneuvering through a sexual battlescape of AIDS and blighted courtship rituals—they have dated and married cautiously. In jobs, they embraced risk and preferred free agency over loyal corporatism. From grunge to hip-hop, their splintered culture revealed a hardened edge. Politically, they have leaned toward pragmatism and nonaffiliation, and would rather volunteer than vote. Today, entering midlife battered by economic hardship, they ascend into political and corporate leadership roles feeling less like hailed winners than like resilient survivors, seeking out safe harbors for the sake of themselves and their families…
[They] grew up as the children of the Consciousness Revolution, an era when the welfare of children was not a top social priority. They learned young to distrust institutions, starting with the family, as the adult world was rocked by the sexual revolution, divorce epidemic, and a shift to a more explicit pop culture. As women entered the workplace before childcare was widely available, many endured a latchkey childhood. Their school achievement leveled out, yet The Nation At Risk report accused them of being “a rising tide of mediocrity.” Come the 1980s, their new cultural statements—hip-hop, grunge, heavy metal, alt-rock—revealed a hardened edge. In the late 1980s, the crime rate surged.
As young adults navigating a sexual battlescape of AIDS and blighted courtship rituals, Xers dated cautiously and married late. Many of them have begun to reconstruct the institutional strength of family that they missed in their own childhood. In jobs, they embrace risk and prefer free agency over loyal corporatism. Through the ‘90s, they faced a Reality Bites economy of declining young-adult living standards—a consequence masked by the phenomenal wealth of young movie stars, athletes, and dot-com phenomes. They responded by becoming the greatest entrepreneurial generation in U.S. history. They have also emerged as the most immigrant generation born in the 20th century. Politically, they lean toward non-affiliation and tend to see volunteering as more effective than voting. They were slow to come to public office, but they are now arriving with a typical brand of get-it-done pragmatism… 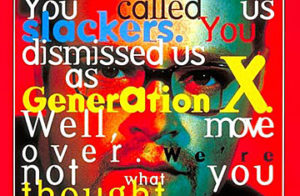 We are at the age where we are entering major leadership roles, both in government, business, and in the community. After a wild youth, the vast majority of Gen Xers see religion as an important part of our lives. We are about half as likely as Boomers to give up on religion. This is why Men of the West often advocate the return of Christianity to front and center in Western Culture. We argue that you should just Shut Up And Go To Church. We bring that same pragmatic and dogged determination to our religion that we bring to every aspect of our lives.
One aspect that clearly defines Gen Xers is that we are hands-on, yet not micromanagers. We find those who can do the job and let them do it. We abhor beuracracy and prefer a decentralized approach to most things. As N.N. Taleb has definitely shown, micromanaging is inefficient and leads to poor results. Here is an example of how this works at MOTW. We have several writers here, and while we do have a couple of us who take the responsibility for scheduling, etc., we pretty much allow everyone to say and do what they want, both in their articles, and in how they represent MOTW. If you have been around awhile, you know that we have our own T-shirt line at Crypto.Fashion, and our own set of mugs. Most of those shirt designs were collaborative efforts, where a few of us come up with an idea, we bounce it off CryptoFashion, etc. Imagine our surprise when we got an announcement about a new MOTW shirt, the original version of the Templar Cross shirt  (it has since been replaced by an updated version, but some supplies are still available). Most of us had no idea that a new shirt was coming out, yet there it was. It turns out that Donner got the idea and just went straight to Crypto. Did those of us who do the managing get  upset? Of course not. It is a great idea, and we encourage everyone to do what they can. We are not micromanagers. We pick the right people and turn them loose.
And it is our time. Any Boomers, Millenials, or other generations that want to get on board are welcome, but for the next few decades, we will be living in a Gen X dominated world, and you’d better get used to it.

Stuffing The Cat Back In The Bag