Editor’s Note: This is our semi-regular reminder to #Homeschoolordie
I wonder how common it is for advanced kids to be held back by teachers who are too stupid to realize what’s going on?
I went to school in Kentucky, at least up until high school, when I moved to Nashville. Back then, Kentucky had “achievement tests” that every kid in 1-12 took at the end of every year to determine their progress.
Now in the 6th grade, you can imagine that I didn’t really grasp the whole concept of test taking. I generally felt like the teachers knew me, and knew what I was capable of.
This is the story of how Lector found out just how stupid government school teachers are. 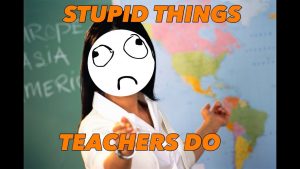 First some background. As you can well imagine, I wasn’t the slowest kid in the class. In fact, I was insanely bored in school; most of my in-class time was spent reading fiction, non-fiction, or drawing. On the occasions that I had a teacher that would object to these things, I would make it evident that I knew as much or more about the appointed subject as he/she/it did. I would point out blatant mistakes in textbooks, I would refuse to regurgitate verbatim dictionary definitions on vocabulary tests, and on occasion, I would throw words at the teacher and explain that they needed to study up some, as well.
Most teachers quickly learned that I was better off left to read on my own.
I never studied, and I rarely did homework. My reasoning for this was simple. I knew the material. Therefore I didn’t need the practice. My time was better spent elsewhere.
I was in the highest level classes for my age group, and I was bored out of my mind.
In my sixth grade English class, we were required to do a book report. I don’t recall the drivel that my classmates were reporting on. No doubt it was something like Nancy Drew or the Hardy Boys. Regardless, I wrote an essay on Macbeth, and delivered an oratory on it that had the class and teacher laughing so hard, a teacher from across the hall came in to make sure we hadn’t been left unattended.
In another memorable moment, I openly debated my algebra teacher about imaginary numbers and their significance.
This is the trouble with having brothers 4 and 8 years older than you are. You aren’t interested in the things that you should be learning. You’re interested in what they’re learning, and sometimes the bastards teach it to you.
Anyway, this was all compounded by the fact that I have a seeing disorder that makes bubble tests confounding.
I tell you all that, to tell you this:
At the end of the sixth grade, I took my achievement tests like a good little sheep. I finished the reading section – mind you, it was a timed test, 1 hour – and finished it in 15 minutes. When I got to the end, though, I found I had one more question than I had place to answer.
Uh oh, I thought, “I could go back and fix it, but why? This test is stupid, and everyone knows I can read.”
So I set about to busy myself… well… that’s not really true. Actually, I took a nap. 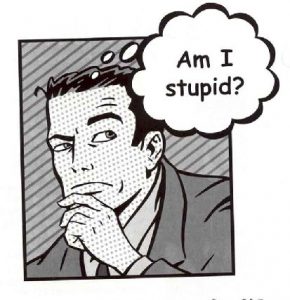 The next year, I was informed that I had been placed in remedial reading. I laughed. In fact, I was happy as I could be. If I’m already bored, I may as well have some free time, right? In this remedial reading class, we had to “read” 3 “books” per 6 weeks. These books amounted to Hop-on-Pop. And get this, the teacher who was teaching the remedial reading class? The same teacher who taught me in Honors 6th grade reading, who had laughed out loud at my Macbeth report, and who had told my mom that I was among the brightest kids she’d ever had.
Did this teacher think it odd that I was there? Nope.
On the first day, after hearing the “requirements,” I laughed out loud and asked, “If I read them all today, and turn in a report on each, does that mean I’m free for the rest of the month?”
She said yes.
So I did just that.
And after finishing reading the 3 little books and writing up a book report on each, I went back to reading Bullfinch’s Mythology.
As happy as I was with these arrangements, my mom was less than thrilled.
She came to the school and raised 7 kinds of Hell. Eventually she learned that I had missed practically every question on the achievement test. She couldn’t believe it, so she demanded to see the test. After a time, it was produced, and what had happened became quite clear. I had put the answer for question 5 on the line for answer 6 and so on. The whole test was 1 line off. Comparing the test with an answer key showed that, in fact, I had a perfect score,if you moved it all up one line.
Confronted with this, and the fact that the teachers had previously given me A’s in Gifted and Talented reading programs, the school….did nothing.
The test score was all that mattered.
Eventually, my mom convinced them to allow me to take a battery of oral exams at a local university. Only when confronted with different test scores, including reading and vocabulary scores that were in the 100th percentile of the entire nation (100th, not 99th), only then was I allowed back into the system.
Ya think I’m sending my kids through that?