The educated gulf is widening.

No, not the education gulf between those with college degrees and those without. I mean the type of basic knowledge that was a mainstay of anyone professing to have an education.

I spend time, probably too much time, on Twitter. And, for now at least, it’s possible to bandy words with ideological opposites when they dare venture forth from their echo warrens. Granted, the audience is partially self-selecting, so by no means is this more than just personal experience. That said, I fear there’s a trend here.

By and large, people aren’t just undereducated, they are maleducated. 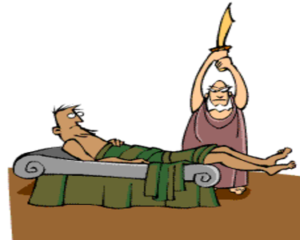 The West used to have men that knew her past and her roots, her stories, legends, and myths. It was a mark of an educated man that he could speak of Greek myths, Roman wars, Medieval Kings, Renaissance Art, and touch on Europe’s grand and glorious history. Vocabulary well exceeded the sixth-grade level we are currently inundated with and seeped in as part of modern common visual parlance. News, advertising, instruction manuals (when not written in undecipherable Engrish), signs, anything in the public sphere that is written is aimed at a reading level lower than high school.

The Greeks aren’t taught. The Trojan Horse still remains part of the shared touchstone, but far too often people wonder if that’s a type of condom.

The Romans aren’t taught. Ask around about gladiators. For too many, their education starts and ends with the movie Gladiator.

Answer this truthfully and without doing a search: Do you know what it is meant by a Procrustean bed?

If you are reading this blog, I’m going to assume you do. Now, to continue with this scenario, if someone accused you of fitting yourself to a Procrustean bed of Politically Correct thought, how would you react?

Aside from being ignored, my most common response received has been my opponent basically saying “Ooooh, big words there, you have no argument so you’re just putting on airs!” But with more typos.

I cannot express sufficiently in words my utter disdain for them. Progressives are the most maleducated lot I’ve run across. Ignorance is one thing, but open hostility toward what once was part of the common knowledge of anyone educated? It’s perverse and obscene.

Worse, it means the common ground we once had is shrinking at an alarming rate. Those that concern themselves with chimeras of micro-aggressions and multiple genders while assigning guilt according to a constantly shifting landscape of imaginary sins retreat further from the past and sanity.

We have fewer means with which to communicate.

We don’t have a common history.

We don’t have shared myths and legends to facilitate communication.

We don’t even speak the same language.

It will come to war.

Why We Excuse Trump's Sexual Indiscretions