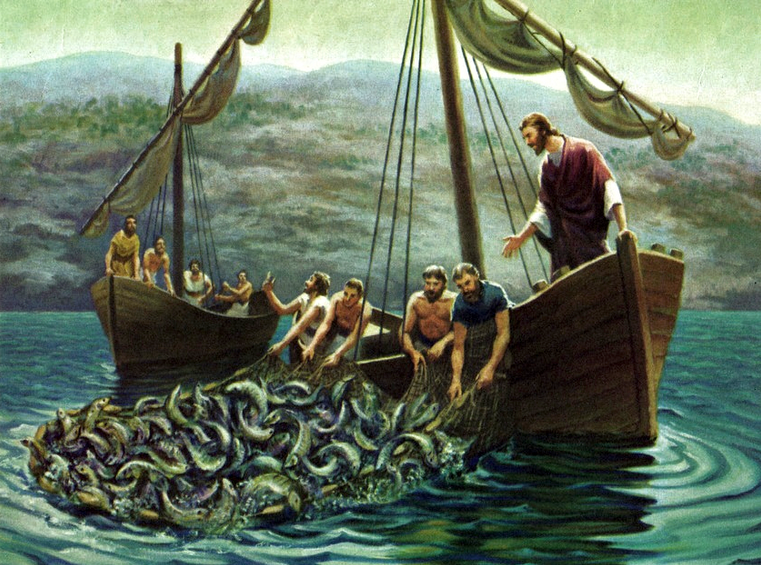 Editor’s note:  The following comprises the fourth chapter, second part (B1), of The Gospel of Luke: An Exposition, by Charles R. Erdman (published 1936).  All spelling in the original.

___________________________________________________
1 Now it came to pass, while the multitude pressed upon him and heard the word of God, that he was standing by the lake of Gennesaret; 2 and he saw two boats standing by the lake: but the fishermen had gone out of them, and were washing their nets. 3 And he entered into one of the boats, which was Simon’s, and asked him to put out a little from the land. And he sat down and taught the multitudes out of the boat. 4 And when he had left speaking, he said unto Simon, Put out into the deep, and let down your nets for a draught. 5 And Simon answered and said, Master, we toiled all night, and took nothing: but at thy word I will let down the nets. 6 And when they had done this, they inclosed a great multitude of fishes; and their nets were breaking; 7 and they beckoned unto their partners in the other boat, that they should come and help them. And they came, and filled both the boats, so that they began to sink. 8 But Simon Peter, when he saw it, fell down at Jesus’ knees, saying, Depart from me; for I am a sinful man, O Lord. 9 For he was amazed, and all that were with him, at the draught of the fishes which they had taken; 10 and so were also James and John, sons of Zebedee, who were partners with Simon. And Jesus said unto Simon, Fear not; from henceforth thou shalt catch men. 11 And when they had brought their boats to land, they left all, and followed him.
___________________________________________________
The call of his first disciples is regarded by many as opening a new period in the public ministry of Jesus. His work was now to assume a more permanent form. The growing popularity of his preaching indicated that the gospel was designed for the whole world. For such a proclamation a definite group of workers must be prepared. The growth of Christianity ever depends upon securing men who will publicly confess and follow Christ.
The scene of this call is described as being “by the lake of Gennesaret.” This charming sheet of water brings to mind so many scenes in the life of our Lord that it has been termed a “Fifth Gospel.” On its western and northern side were the cities in which most of his work was done; the eastern shores were not inhabited and thither Jesus would resort for rest.
Those whom Jesus called were fishermen, sturdy, independent, fearless. They were not strangers to Jesus nor had they been indifferent to spiritual truths. They had attended the preaching of the Baptist and had come to regard Jesus as the Messiah, but they were now called to leave their homes and their tasks and to become his constant companions and disciples.
On this occasion Jesus had borrowed the boat belonging to one of his friends to use as a pulpit and from this he had addressed the crowds. When he had finished his discourse, he gave to the four men he was about to call an impressive object lesson of the character of the work and of the great success which would attend their ministry if they would forsake all and follow him. He wrought a miracle especially impressive because it was in the sphere of their daily calling at a time and place where they were sure it was useless to fish. They were enabled by the guidance of Jesus to take such a draft of fishes that their nets were strained and their boats so loaded as nearly to sink. It was so plainly a manifestation of supernatural power that Peter felt himself to be in the presence of a divine Being and expressed the fear which all have felt when face to face with God. Jesus spoke the word which not only removed the terror of Peter but gave to him and his companions courage for all the coming years, “Fear not; from henceforth thou shalt catch men.”
So to-day Jesus is calling men to become his disciples. Obedience may involve sacrifice, but it is certain to result in the saving of human souls.
(Go back to previous chapter)
(Continue to next chapter)

Vox Day: The Collapse Of The Elite