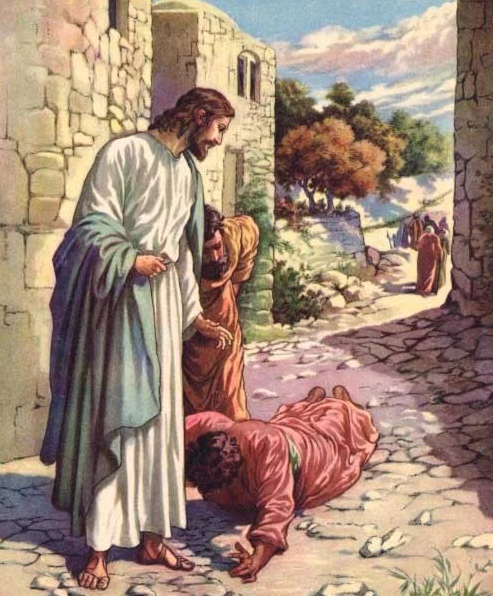 Editor’s note:  The following comprises the fourth chapter, second part (B2), of The Gospel of Luke: An Exposition, by Charles R. Erdman (published 1936).  All spelling in the original.

2. Jesus Cleansing a Leper (5:12-16)
___________________________________________________
12 And it came to pass, while he was in one of the cities, behold, a man full of leprosy: and when he saw Jesus, he fell on his face, and besought him, saying, Lord, if thou wilt, thou canst make me clean. 13 And he stretched forth his hand, and touched him, saying, I will; be thou made clean. And straightway the leprosy departed from him. 14 And he charged him to tell no man: but go thy way, and show thyself to the priest, and offer for thy cleansing, according as Moses commanded, for testimony unto them. 15 But so much the more went abroad the report concerning him: and great multitudes came together to hear, and to be healed of their infirmities. 16 But he withdrew himself in the deserts, and prayed.
___________________________________________________
Leprosy was regarded as the most loathsome and terrible of diseases. It existed in various forms but its invariable feature was its foul uncleanness. The leper was an outcast; he was compelled to live apart from the dwellings of men. He was required to wear a covering over his mouth and to give warning of his approach by crying, “Unclean! Unclean!” His case was regarded as hopeless; he was reckoned as dead. Loathsome, insidious, corrupting, pervasive, isolating, ceremonially and physically defiling, surely leprosy is a fitting emblem of sin; and this graphic narrative presents a parable of the power of Christ to cleanse and to heal and to restore. It is a vivid picture which Luke draws; the humble trust of the poor sufferer, his pitiful cry, the sympathetic touch of Jesus, the word of command and the instant cure. While Jesus forbade the man to arouse excitement by telling of his healing, he commanded him to report his case to the priest, that the highest religious authorities might have unanswerable testimony to the divine power of Christ, and also that the man might bring the offerings required by the Law and thus express his gratitude to God. Our Master does expect all who have felt his healing touch to testify of his grace and to show their gratitude by offering to him the service of their lives.
Such miracles could not be hid. The crowds so pressed upon Jesus that he was forced to withdraw to the desert for rest; and as the scene closed he who had startled the multitude by the manifestation of his divine power was left alone seeking help from God in prayer.
(Go back to previous chapter)
(Continue to next chapter)

An Age Of Lies and Liars