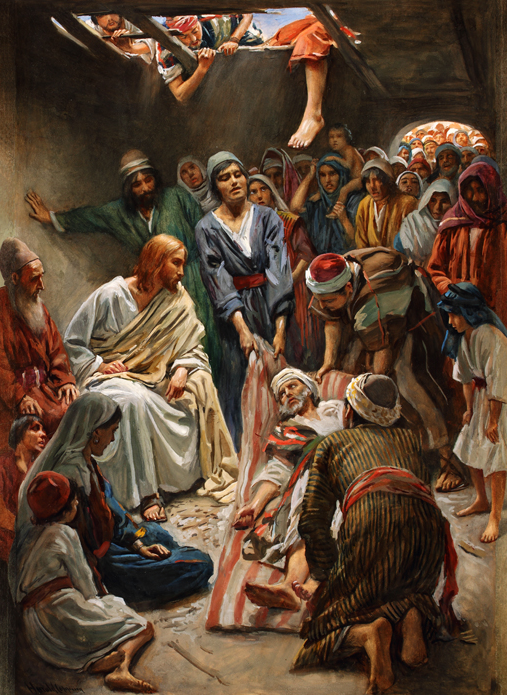 Editor’s note:  The following comprises the fourth chapter, second part (B3), of The Gospel of Luke: An Exposition, by Charles R. Erdman (published 1936).  All spelling in the original.

3. Jesus Forgiving Sins (5:17-26)
___________________________________________________
17 And it came to pass on one of those days, that he was teaching; and there were Pharisees and doctors of the law sitting by, who were come out of every village of Galilee and Judæa and Jerusalem: and the power of the Lord was with him to heal. 18 And behold, men bring on a bed a man that was palsied: and they sought to bring him in, and to lay him before him. 19 And not finding by what way they might bring him in because of the multitude, they went up to the housetop, and let him down through the tiles with his couch into the midst before Jesus. 20 And seeing their faith, he said, Man, thy sins are forgiven thee. 21 And the scribes and the Pharisees began to reason, saying, Who is this that speaketh blasphemies? Who can forgive sins, but God alone? 22 But Jesus perceiving their reasonings, answered and said unto them, Why reason ye in your hearts? 23 Which is easier, to say, Thy sins are forgiven thee; or to say, Arise and walk? 24 But that ye may know that the Son of man hath authority on earth to forgive sins (he said unto him that was palsied), I say unto thee, Arise, and take up thy couch, and go unto thy house. 25 And immediately he rose up before them, and took up that whereon he lay, and departed to his house, glorifying God. 26 And amazement took hold on all, and they glorified God; and they were filled with fear, saying, We have seen strange things to-day.
___________________________________________________
Leprosy was the symbol of the uncleanness of sin; paralysis of its impotence and pain. On the occasion of healing a paralytic, Jesus, however, did something more startling: he forgave sin. The poor sufferer had been borne by his four friends who were discouraged by no obstacles. When they were unable to enter the house where Jesus was, because of the multitudes which surrounded it, they went to the roof and let the sick man down through the tiles into the very presence of Christ. Their earnestness is a rebuke to us who make so little effort to bring our comrades within the healing influence of our Lord.
Jesus recognized the faith both of the man and of his friends and responded with an utterance which occasioned his hearers more surprise than had the opening of the roof, “Man, thy sins are forgiven thee.” No request had been made for such forgiveness, but Jesus read the heart. He saw the yearning of the sufferer for healing not only of his body but of his soul. He recognized his sorrow for the sin which had caused the sickness, and the anguish of remorse and immediately he spoke the word of pardon and of peace. Thus Jesus voiced the message which the world seems reluctant to accept. He declared that physical ills and social evils are less serious than the moral and spiritual maladies of which they are the symptoms and the results; and further, he expressed his claim of divine power to pronounce pardon and to remove guilt.
This claim at once aroused the bitter resentment of the scribes and Pharisees who were present and they began to reason: “Who is this that speaketh blasphemies? Who can forgive sins, but God alone?” Their reasoning was correct. Jesus was a blasphemer worthy of death, or else he was divine.
To prove his deity Jesus proposed an immediate test: “Which is easier, to say, Thy sins are forgiven thee; or to say, Arise and walk?” Of course neither is easier; either requires divine power. Therefore, when at the word of Jesus the man arose and started for his home, “glorifying God,” it is not strange that “amazement took hold on all, and they glorified God.”
Thus the miracles of Christ were real proofs of his deity as well as expressions of his love; they were moreover parables of his ability and willingness to deliver man from the guilt and power of sin.
(Go back to previous chapter)
(Continue to next chapter)

Editor’s note: The following is extracted from The Conquered World, and Other Papers, by R. F.