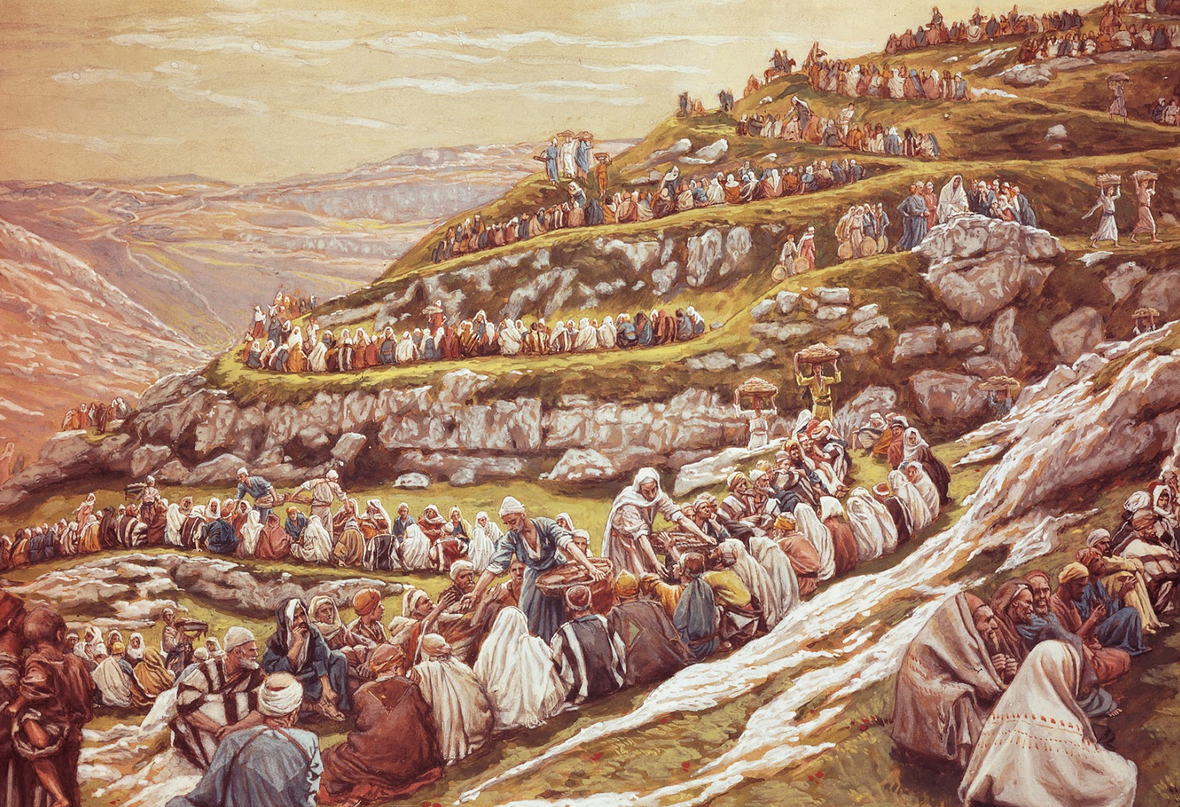 Editor’s note:  The following comprises the fourth chapter, fourth part (D2), of The Gospel of Luke: An Exposition, by Charles R. Erdman (published 1936).  All spelling in the original.

2. The Five Thousand Fed (9:10-17)
___________________________________________________
10 And the apostles, when they were returned, declared unto him what things they had done. And he took them, and withdrew apart to a city called Bethsaida. 11 But the multitudes perceiving it followed him: and he welcomed them, and spake to them of the kingdom of God, and them that had need of healing he cured. 12 And the day began to wear away; and the twelve came, and said unto him, Send the multitude away, that they may go into the villages and country round about, and lodge, and get provisions: for we are here in a desert place. 13 But he said unto them, Give ye them to eat. And they said, We have no more than five loaves and two fishes; except we should go and buy food for all this people. 14 For they were about five thousand men. And he said unto his disciples, Make them sit down in companies, about fifty each. 15 And they did so, and made them all sit down. 16 And he took the five loaves and the two fishes, and looking up to heaven, he blessed them, and brake; and gave to the disciples to set before the multitude. 17 And they ate, and were all filled: and there was taken up that which remained over to them of broken pieces, twelve baskets.
___________________________________________________
The feeding of the five thousand is the only miracle recorded by all four evangelists, in fact the only incident of the Galilæan ministry of our Lord common to them all. Here this ministry attains its climax. This was the hour of the greatest popularity of Jesus; the multitudes would have offered him a crown, but he saw before him the shadow of the cross.
The Twelve had returned weary with labor but elated by success. Jesus desired for them a season of retirement, of rest, and instruction. They withdrew to a secluded place beyond Bethsaida on the east shore of the lake; but there they were discovered by the eager multitudes. Jesus showed his infinite sympathy by cordially welcoming the crowds which had intruded upon his privacy and interrupted his plans; he gladdened their hearts with the gospel message and healed their diseases. And as the day declined he pitied their hunger and met their needs by miraculously multiplying five loaves and two fishes which the disciples had secured.

For the disciples of to-day there are serious messages in this familiar story; perhaps none is more obvious than that of the measureless compassion of Christ. With something of his sympathy we should look upon the multitudes perishing for lack of physical and spiritual food. Their call for help should not be regarded as an interruption but as a guide in shaping our personal plans. While of ourselves we are unable to give relief, yet if our all is offered to the Master, it will be multiplied marvelously by his divine power. The miracle seems to have been wrought as Jesus looked up in prayer. We must surely look to him and seek his blessing in our service. We must allow no broken fragments to be lost; some families could live on what other families waste; then, too, the followers of Christ must learn a true economy of time and talents and wealth if the Bread of life is to be brought to a famishing world.
(Go back to previous chapter)
(Continue to next chapter)