Laramie Hirsch first posted this on his own site, but has agreed to post here at MOTW, as well.

This week’s Bastille Day in Paris featured a man flying around on a brand new flyboard prototype, designed by inventor Franky Zapata. This “future soldier” buzzed through the air above the crowds and underneath a sky clouded in the colors of France’s flag. In his hands he brandished a rifle in the hopes of demonstrating the tactical application of this new technology for law enforcement and the military. At first 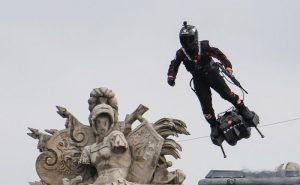 blush, this wondrous spectacle looks by all intents like a peek into a hopeful and advanced future of scientific wonders. But after a moment’s thought, when you’ve had time to unpack and realize the implications of such a technology, an uneasy feeling settles into your gut, and you begin to realize that maybe—just maybe—what you’re truly seeing is a glimpse into a horrific dystopian future of oppression and fear.
You would not be wrong to experience these kinds of negative feelings towards French police power on Bastille Day. This is not a day to celebrate. Not for the world, not for the French. It is a day that celebrates atrocities committed against a Catholic people—atrocities that inspired the Bolshevik mass murder of Christians in pre-Soviet Russia. It inspired the Nazi mass extermination of Hitler’s enemies. And, in fact, it would not be surprising at all if we were to see this bloody period celebrated by today’s jackboot Antifa thugs, who bring their violence to various major U.S. cities.
The “Enlightenment” horrors that took place in France were a direct assault against the Logos. It was an attack against Catholicism, an attack against Christian monarchy, and an attack on the liberty of decent, God-fearing Frenchmen. Those wicked armies of the Republic, led by “modern, progressive” radicals killed more than 300,000 Catholic peasants in their day. The king and queen were beheaded, their very young son left to die in prison. Churches were looted. Clergy were sent running. Any remaining priests were forced to swear allegiance to the French state instead of the pope—much like the Chinese are forced to give in to a state-run Church today. And after this horrible period, French armies were launched into the rest of Europe to “liberate” the continent from the annoyance of their Catholic traditions.
The horrors of that day cannot be overstated. Heads were paraded through the streets on pikes or even thrown at loved ones. Mobs of feral revolutionaries—like a riot of zombies—climbed over the walls of abbeys to slaughter clergymen with clubs, pikes, and axes. Common people, faithful church-goers, were targeted and killed. More than 1,800 people were drowned at Nantes, dropped in the frozen water and sunken down to the bottom to die.
Some tried to fight back, such as the faithful Catholics of the Vendee. But there was to be no mercy for enemies. Those who ambushed revolutionary killers from the cover of forests and brambles would be caught and butchered like pigs. Leaders were shot, beheaded, or hanged. The National Convention demanded the execution of every last man, woman, and child of the Vendee. Not one was to be left alive.
“Their instruments of fanaticism and superstition must be smashed.”
The French National Convention
Not even the dead were allowed to rest. Bodies of dead royals were dug up and unceremoniously reburied in mass graves. Many people who were killed had their bodies torn apart or desecrated in different ways. Sometimes their bodies were stuffed with straw. Sometimes their heads would be put on display. One particular Vendee leader had his body cut up and distributed to scientists. His head was pickled in a jar, and his brain examined to seek out the seed of rebellion.
This was a time of paranoia, hysteria, and pure hate. The Old Order had to be destroyed. Society, the revolutionaries believed, needed to be culturally reconstructed through a new program of social engineering. The Left’s hated classes had to be rooted out, and the opponents of secularism and progress had to be destroyed. Scientism was the new god. Notre Dame was transformed into the “Temple of Reason.” All vestiges of the Logos were attacked. Even the calendar had to be remade. Months of the year were renamed according to rationalist ideology, and the reckoning of the year was to be shifted away from Christ’s birth and fixed on the inauguration of the Republic. Democracy was claimed as the only valid government, and all remaining European monarchies were now illegitimate. 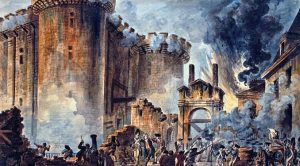 There was a paranoia that more subtle counter-revolutionaries would take advantage of any remaining legal technicalities that would give them cover. There was a concern that those opposed to The Revolution would use loopholes to avoid detection and punishment, and that they would somehow spread their traditional agenda underground. And ultimately, conditions became such that informers carefully listened to conversations, took notes, and paid attention to the jokes and conversations of their neighbors. Surveillance was amped up in the hopes of disclosing the location of any hiding priests or nobles.
The radical mindset of the French Revolution was a frame of mind and action that today’s modern Left desperately wants to return to. They long to have another period in which people are literally torn apart in the streets. They yearn to cut the babies out of the tummies of church-going mothers. They want to force the sons of good families to fight their evil wars. These wicked people want a long line of their enemies ending at the bloody, gory blade of a guillotine. They desire for blood to flood the gutters once more. Today’s Left wants to liquidate their opponents, much as the French Revolutionaries did in their wicked day. Joseph de Maistre puts it best when he states:
“There is a satanic quality to the French Revolution that distinguishes it from everything we have ever seen or anything we are ever likely to see in the future.”
The storming of The Bastille—and the French Revolution as a whole—was a complete abandonment of piety, humility, and goodness, and it was the embrace of pride, hate, and terror. The apostles of The Revolution howled for liberty, equality, and fraternity. But in truth, they wanted to replace the true liberty they already had with license. There was no desire for equality whatsoever; rather, the revolutionaries wanted to overpower their moral superiors—the same we-just-want-tolerance game the Left played in the U.S. this past century. And there certainly would be no fraternal love for any of those who continued to cling on to their traditional past. They would be scrubbed out of the public mind forever. The institutions that had preserved and protected the people for over a millennia were viewed as stifling obstacles that were to be relegated to a bonfire. They wanted to destroy l’ancien regime and replace it with the sick, bent world we endure today. Today’s Left and France’s revolutionary forefathers may have been initially asking for tolerance and a chance to co-exist with normies, but their true motives were later displayed for the entire world. And once they took power, it became clear that there was no room for anyone else in France but their own:
“Social protection is due only to peaceful citizens; there are no citizens in the Republic but the republicans.”
Maximilien Robespierre
Those who would not cooperate with the new hostile takeover would be “forced to be free,” as Rousseau put it. There could be no escape if the Revolution were to work out at all. Everyone must submit to the new program, history would have to be rewritten, and anyone holding onto old assumptions would have to be sterilized from public memory.
Today, French Revolutionary ideals are enshrined throughout most political parties in the West. (In fact, the three-pound key of The Bastille, itself, was once given to president George Washington as a gift.) Celebrations of these kinds of mournful-yet-lionized periods still abound. No one in authority has been smart enough to unpack history and realize its implications and overall message.
Celebrating Bastille Day is like celebrating Hitler. It is like a parade for Stalin. It is like cheering for Pol Pot’s purges in Cambodia. Bastille Day is an evil remnant from an evil time. It should be a day of mourning, repentance, mortification, and prayer. Instead, our overlords continue to publicly hold that event in high esteem, knowing full well that the ignorant proletariat can’t grasp what really happened. How darkly fitting that this year, an oppressive police figure on a hoverboard is this year’s symbol for Bastille Day.

"The Idle City" by Lord Dunsany