I finished up the Cavalry Trilogy, watching Rio Grande. As with the other two films, this is a John Ford picture, starring John Wayne. This was the Duke’s first movie with Maureen O’Hara, who would go on to become one of his closest friends. As I mentioned in the last installment, we have several crossover characters and actors from the first two films, though the actual connection between the movies is not overly clear. We have characters with the same (or similar) names, often played by the same actors, and yet, there is no real continuity between the movies. Perhaps these similarities are just the writers and director being efficient, or perhaps there is some thematic connection. In any event, all three movies can stand alone, or be watched in succession (as I did). Along with Wayne and O’Hara, we have Ben Johnson, Victor McLagen, Hary Cary, Jr., and Claude Jarman, Jr. in starring roles. In order to add some length to the film, and to provide a current Western ethos, the Sons of the Pioneers sing several songs as the “Regimental Singers.” 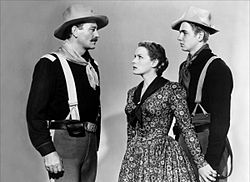 The dominant themes of Rio Grande are pretty easy to discern: loyalty, duty, sacrifice, and reconciliation. We can simply take them in that order.
At every level, the movie presents us with characters who are steadfastly loyal – to one another, their families, and to their nation. Johnson’s character was wanted for manslaughter back home in Texas, where he had killed a man who had attempted to take advantage of his sister. He is perfectly willing to face the music and even fight the charges, but wants to wait until after his sister is married and moved away to spare her the embarrassment that would come from a public trial. His loyal friends help him avoid arrest and extradition several times.
Jarman plays Wayne and O’Hara’s son, who flunked out of West Point, but then immediately enlisted. He wants to serve his country, regardless of how that is done. He is a loyal friend to his compatriots.
These are just a couple of examples, but serve to demonstrate the theme of loyalty that permeates the entire story.
Duty also plays a central role. Wayne and O’Hara are an estranged married couple, due to the fact that during the War Between the States, the Yankee Wayne had ordered the burning of his Southern wife’s plantation (carried out by McLagen’s character). Neither man wanted to do this, but it was the right decision militarily, so they did it.
In one scene, the US Troops are chasing renegade Indians, who then cross the border into Mexico, where they overwhelm a small Mexican military unit. Wayne meets the Mexicans in the middle of the river and asks for their permission to cross and help them defeat the Indians. When the Mexican officer says that he is not allowed to offer such permission, both men thank one another, and return to their own sides of the river. They follow orders – their duty. As Wayne states, referring to his son, “But he must learn that a man’s word to anything, even his own destruction, is his honor.”
The main characters all make sacrifices, often related to their adherence to doing their duty. As mentioned, Wayne and O’Hara had not seen one another for 15 years, since the tragic events of the war. This also means that Wayne had not seen his son in that time.
Families are separated because of the tensions and potential conflict with the Indians, and one brave soldier loses his wife when the Indians attack the wagon train trying to move the non-combatants to safety at Ft. Bliss. In the ongoing battles, lives are lost, men are wounded (including Wayne), and things that had been hoped for are lost.
These troops lived a hard life, eschewing the easier life that was available had they remained civilians. Wayne warns his son, early in the film, “But put out of your mind any romantic ideas that it’s a way of glory. It’s a life of suffering and hardship, an uncompromising devotion to your oath and your duty. ”
Highlighting these first three themes of loyalty, duty, and sacrifice, Wayne’s character warns new soldiers, “I don’t want you men to be fooled about what’s coming up for you. Torture, at least that. The War Department promised me 180 men. They sent me eighteen. You are the eighteen… so each of you will have to do the work of ten men. If you fail, I’ll have you spread-eagled on a wagon wheel. If you desert, you’ll be found, tracked down and broken into bits. That is all.”
Of all the themes, Reconciliation stands out. We find that time does help to heal wounds. The estranged couple is reconciled, and Wayne is able to reconnect with his son. This is the most obvious example of reconciliation, but it really just serves as the starting point.
In an early scene, Wayne’s son gets into a fight with another trooper, who believes the boy is being singled out for favoritism, due to his 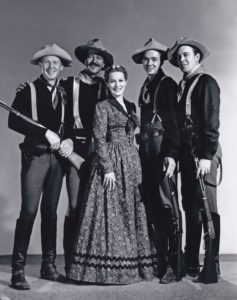 parentage (which is really not true). By the end of the fight, the two men begin to respect one another and become good friends.
Toward the end of the films, Gen. Philip Sheridan orders that “Dixie” be played by the band, as the troops pass in review. He does this to honor O’Hara’s character, recognizing that she has sacrificed as much as her husband. As the song wafts across the parade ground, she twirls her parasol merrily, a huge grin on her face. Recognizing that this hated former foe of the Confederacy can offer such a consolation indicates the healing of rifts that had previously torn apart families and the country.
As I conclude my look at these three films, I appreciate the depth and quality of the works that Ford gave us. I have seen Fort Apache and She Wore a Yellow Ribbon several times, but I think this might be the first time I have watched Rio Grande, and I am glad that I did. It is a fitting conclusion to the trilogy, and highlights some thematic elements that are presented in all three movies. If you have not watched them before, or if it has been awhile, I encourage you to give all three a viewing. You will be glad you did.

The Case For Private Healthcare