The leftist trifecta, “racism, sexism and homophobia” will always occur in extended conversation with an educated idiot.
There are a few things going on whenever someone uses the trifecta in a sentence:
1) You can safely determine your conversational partner is historically ignorant. Those who preach against the left’s three great sins of man against man (sexist; I know) possess no mental timeline or perception of the movement of history beyond what happened on “survivor” last week. When asked what perversion is to be normalized after adult consensual same sex buggery, you’ll get only owlish blinking or 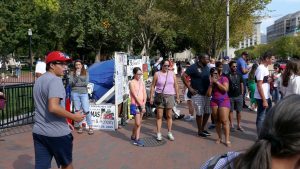 protestations that the world will be perfect once buggery is equated to sexual reproduction. The same holds true for an inquiry as to which form of life equal protection under law shall next be extended. There is a reason the left dismisses the “slippery slope”; they don’t possess the historical knowledge to perceive its existence.
2) Your conversational partner wants you to know he is perceptive of popular societal trends and his superior powers of perception have painstakingly discerned the day-glo green painted path the sheep are taking toward media trumpeted enlightenment.
3) The moron is testing your reaction to determine whether you, too, have seen the subtle clues of endless repetition and stunningly original dramatic portrayals of morally, intellectually, and ethically superior women, black folk, and homosexuals. Failure to acknowledge the grave danger posed by the triumvirate as a given will be taken as evidence evil has not yet been stamped out in the world and as reason to continue on the path toward eugenics.
4) The idiot uses the leftist trifecta to determine if you are the consummate intellectual he so desperately wants you to perceive him to be.
The above are to be applied only to the willfully ignorant and incurious. Not everyone in a stupidity trap is there by design and may yet learn better.
Update: When the American Psychiatric Association removed homosexuality as a diagnosis from their DSM in 1973 it left an empty space: Intolerance Disorder. Dissent as a mental disorder; now who would have thought of that? (besides Lenin)

The "He Needed Killin'" Defense