Editor’s Note: Laramie originally posted this at his site, but asked us to cross post here, as well.

So, as usual for this presidency, the Commander-in-Chief has done something shocking, 48 hours have passed, nothing catastrophic happened, and the wide world is moving on. The event becomes a forgotten nothingburger. Yes, Trump serves the Zionists. Of course he does. But he also tries to make good on his promises: namely, keeping the U.S. out of “forever wars. ” Does anyone remember Trump lobbing missiles into Syria? No. Before this month, was anyone in the United States still talking about Trump’s 2018 abandonment of the Iranian nuclear deal? No. Will anyone remember that our president ordered the attack against an Iranian commander only shortly after learning that this same commander —a man already responsible for at least 600 American deaths—was orchestrating attacks against our embassies? No, nobody will remember that either.
Again, make no mistake: Trump most definitely serves the interests of the Zionists. I’ve discussed this before in May of 2018. But to what extent? Is he willing to drag Americans into a fruitless war with Persia for his Jewish friends? Or is his commitment to the American people greater than that to Netanyahu?
As I said last week, there are many, even on the Right, who decry our president’s attack against this American-killing Iranian commander. Yet doesn’t the United States have a right to exercise justified retaliation upon killers of U.S. citizens? Aren’t there consequences for when an enemy commander attacks an embassy? Or are American lives cheap and unworthy of support from their own government?

Iran does not want war with the United States. And Trump wants no war with Iran. But Iran made a mistake in its extrapolation from that truth. Assuming that because Trump did not want war, he would recoil from a fight, Soleimani believed he could kill Americans with impunity, as long as his fingerprints were not on the murder weapon.
– Pat Buchanan, If Baghdad Wants U.S. Troops Out, Let’s Go!

And what on Earth is all this whining about from the so-called Right? Haven’t they learned that nothing is as it seems with President Trump? Have not the people on the Right figured out that Trump does not act for the reasons you think he’s acting? There is always more going on behind the scenes than we have access to. This president does not operate on a 24-hour news cycle. The political and military policies of a government are not there to fulfill people’s desire for Internet-based dopamine impulses. 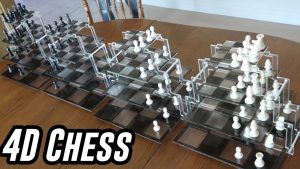 Not only was the killing of Qassem Soleimani justified and called for, but it also sets some things in motion. There are outcomes that could come from this that a short-term-memory populace are not taking into consideration. Yes, it is unnerving to tune in to a news channel and read or hear about some kind of sudden military action taking place on behalf of the U.S. President. But discipline and self control can prevent us from looking like fools later on down the line.

Another thing that became really evident is the the knee-jerk anti-Americanism of the Alt-Right—the way that they were all just so passionate in condemning the United States for assassinating somebody who David Petraeus said played a big role in the deaths of 600 American servicemen and thousands injuries to thousands of others. But the knee-jerk impulses of the American Right are anti-American and had never been more blindingly obvious.
Luke Ford, from The Luke Ford Show: BOOK CLUB: Stalin, Volume I: Paradoxes of Power, 1878-1928

Consider how, as Pat Buchanan has recently discussed, that the killing of this Iranian commander has drawn the ire of many officials in Iraq. Iraq’s parliament has voted to expel all U.S. troops. This is absolutely great news, because the American people also want their troops to return to the States, and preferably have them stationed on the Southern Border to fight Mexican drug cartels. By taking out Soleimani, the Iraqis are able to now have a reason to call for our expulsion, the Iranians are given an excuse to launch harmless missiles and appear tough, and the American people are able to demand that we pull out. This is a grand occasion.
But wait! There’s more!
While it is true that there appear to be protests in Iran that denounce the United States for attacking an Iranian military leader, the truth is that those protests are staged and government sanctioned. In truth, the Iranian people have been emboldened to protest against their own corrupt government. Iranians are gathering together and chanting: “Soleimani was a murderer” and “Our enemy is right here!”
Meanwhile, the Israelis have gotten their pound of flesh from Trump’s swaggering gesture. Of course. But they’re also being called out as President Trump’s puppetmaster. Benjamin Netanyahu had to come out and state that Soleimani’s assassination was an American event, not an Israeli event. Furthermore, he stated that Israel was not involved. And yet, Haaretz is reporting today that Israeli intel enabled American forces to take out Soleimani. So, Netanyahu now has egg on his face.
As for the Iranian regime, they’ve only drawn more fire upon themselves. Their warmongering and saber rattling estranges them from the rest of the world. Their missile attacks appear harmless. And the recent shooting down of a Ukranian airplane makes the regime look incompetent.
Killing Soleimani was a win-win for all the right people, and only this current U.S. president had the guts to do something like this. Could a war with Iran break out? Yes, it is possible. But this act of justice on the part of President Trump currently appears to have opened up a lot of positive outcomes.

Hans Egede, The Apostle to Greenland