Editor’s Note: Yeah, yeah, yeah. We know we are almost a week late with this one, but it was so good we didn’t want to wait until next year. Plus, the message is good for any day of the year. 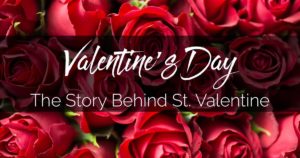 So, be honest. You think Valentine’s Day is a Hallmark Holiday right? Invented to advance consumerism or as just one more “Hey let’s buy stuff for girls!” holiday.   Am I wrong?
Or, maybe more likely, you haven’t given .0327 seconds thought into how Valentine’s Day happened or who Saint Valentine was.
Well, have a seat.  It’s story time.
The man who became Saint Valentine was born in The Year of Our Lord 226.  Now, that was a long damn time ago.  And back then, Rome still pretty much had her say about – well every damn thing.  And there was this one Roman emperor who happened to think that married soldiers were weaker than unmarried soldiers.  So he made it illegal for men in his army to marry.
Valentine… well, Valentine had a rebel streak. And he thought that rule was bullshit.  So Valentine would secretly marry soldiers to the women they loved.  He did this at great risk.  In fact, he was eventually discovered and sentenced to be executed.
Now, while he was awaiting execution, he befriended his jailer.  Because, well, I mean that’s what people who end up with “Saint” before their names do.   Turns out the jailer had a daughter who was blind,  and Valentine liked the young woman very much.  He decided he would pray and ask God to heal her blindness.  But his faith was such that before he met with the girl, he sat down and hand wrote a note to her, so when she was healed and she could see, she could read it.
He prayed for that girl, and God healed her, and she eventually did read the note, which was signed:
Your Valentine
And now, as a great man once said, “you know the rest of the story.”   Now you know why we send Valentine’s cards.  And now you know why Valentine’s Day is a day to celebrate love and romance.   And now you also know why “Galentine’s Day” is abomination.