Editor’s note:  All images featured in this chapter are taken from Dutch historical sources.

I Win a Prize

When we were about to leave school to learn a trade, the principal had the custom to try the children with problems. We had to figure them mentally, one after another, harder and harder, until we got stuck. The year that I was to leave school, with it was the last problem, the same boy that was so thin and did not dare to run first over the ice, raised his finger and I after him. No more fingers were up. He had to explain how he arrived at the answer. He started out right, but could not finish it.

The principal had promised a prize for the one who was able to solve the problem. When he told me to go ahead and explain it, I did it without hesitation and the teacher wrote my name down in his note book for the prize. This time I did not get wet. But the principal forgot all about to give me the prize.

About a year and a half later, after I had left school, I talked to his son, who studied for teachers and told him that his father had written my name down in his notebook for a prize but that I never got it. Shortly thereafter, I was told to come to the home of the principal and he handed me a book, descriptive of the Netherlands, with some appropriate inscription on the fly leaf. I thanked him for it and later put it into a box, which we were allowed to have and store in the attic. I showed this book also to my brother and he liked it. Somehow I never saw it again, though I tried hard to retrieve it. 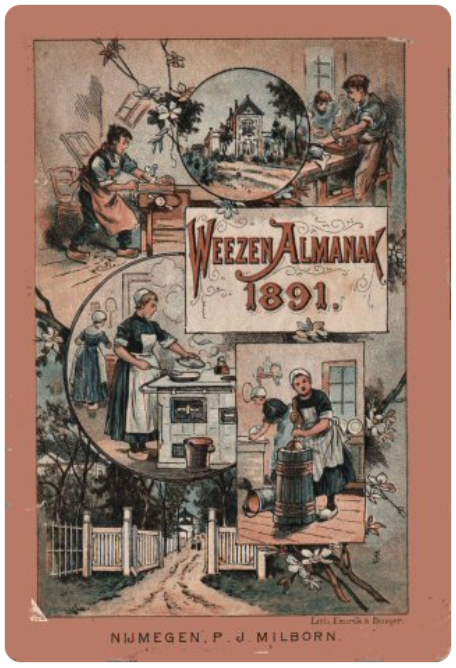 When I left school and started to learn a trade at my 12th year, I had completed, what is about equal to the 7th grade in America. We had to pass through six grades and it took six school years, 4 years in Gorkum and 2 years in the orphan’s home. The last 2 years were very full for we got a vacation of only one and one half days, in which the school rooms were cleaned. About 50 girls would go at it & finished things up. The institution had its own Christian school, although I believe, the teachers were not at all equally spiritual. The principal was a very sincere, Godly man, we all know that. He opened with a song or two and the teacher would pray. We had to learn psalms and hymns. I do not recollect much of my spiritual life, although at times in church I had impressions. At one occasion when there was a different speaker, I listened intently and he made a statement about which I intended I would ask the apostle Paul when I meet him in heaven. At a certain service, Dr. Otte from China was present and he related about his work there. I don’t remember the details but it was interesting. Later in life I discovered that he was from America and related to the Otte Brothers of a laundry in Grand Rapids, Michigan. 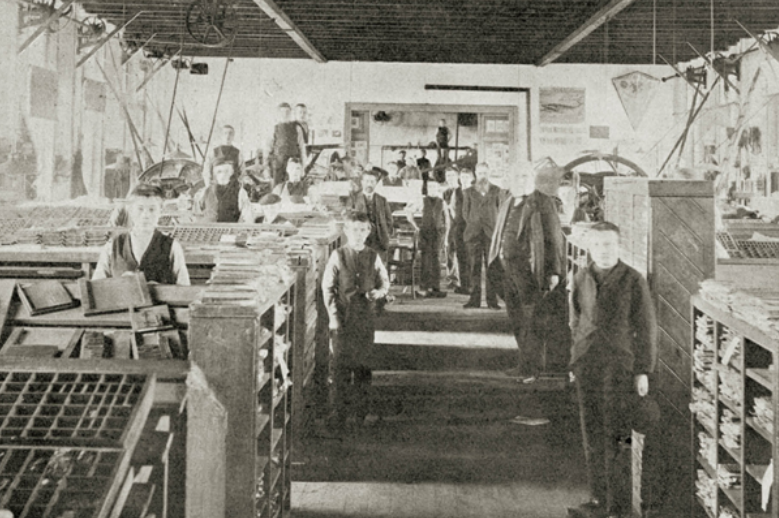 Apprentice at the Print Shop

We were, as boys, usually allowed to follow the trade we would like to learn. At times, however, some of the boys were shoved into it. There was opportunity to learn printing, book binding, carpentry, painting and decorating, bricklaying and plastering, tailoring, shoemaking, wood shoe cutting, cabinet making, blacksmithing, gardening, landscaping and farming. Blacksmithing appealed to me. In Gorkum I could watch the blacksmith for a long time before I got tired of it. I talked it over with my brother who was then serving his apprenticeship as a blacksmith and he was very good at it. But he talked me out of it and advised me to become a printer. His reason was that he thought it was too heavy work for me to become a blacksmith. He judged me by himself for he was not so very strong and took after father and later he died of the same sickness.

When I entered the print shop as apprentice, it was in the month of May. At 5:30 in the morning the bell would ring and we all, young and old, had to get up. Work started at 6:30, so we had time to wash ourselves. In the morning all the boys that worked at a trade could eat a slice of black rye bread and would work till breakfast time. At 8:00 we would go to the ward and have or breakfast of a cup of milk and water, a slice of rye bread and another one baked of mixed flour. The rye bread was buttered – that is oleo – and the other was not. It always tasted good.

The first thing I had to do in the print shop in the morning was to sweep the floor, with a small, worn out brush, on my knees. We had to save the sweepings, to be gone over later for type that might be in it. I took it very seriously for I was told type was very expensive. The next move was to learn the case that the “boss” all the masters, overseers, or instructors in the different shops were called “boss” was not in a hurry and he left me at it for two days before he handed me a stick to learn to set type. A stick is an instrument in which type is set up, letter by letter to form a line. When the stick is full, about 10 lines, then it is set on a galley to be formed into pages on columns, as the case may be. It did not take me so long to learn to set type, but I had to learn to concentrate and at first I did to set such a very clean proof and I was disgusted. It took a long time before I was allowed to have my type actually used for a book or magazine. When I succeeded in turning out a cleaner proof, I also enjoyed the work better. 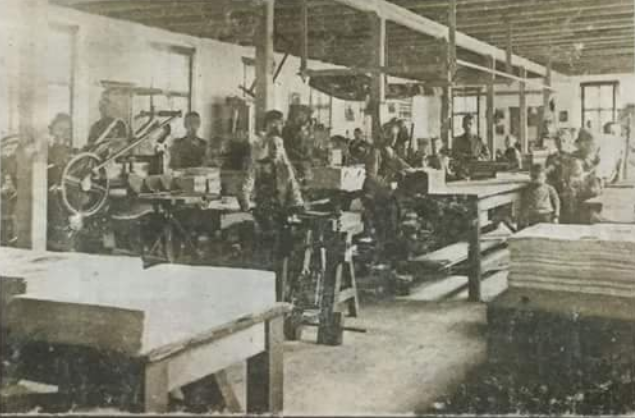 By nature I was rather studious and loved to read. When we would set the type for a book I usually read the story before it was all out in type. The same with interesting copy intended for the magazines of which we printed four every month. We also printed a monthly paper in the interest of Jewish Missions. I remember one name in this paper appeared very frequently, Rabinovitch. Sometimes Hebrew, Greek and other languages had to be set.

When I was about 15 years old, my brother one night had a hemorrhage of the lungs. I was very much afraid when I saw the blood and I thought he was going to die. But he recovered and after a few days returned to blacksmithing. He was smart and when we got a new print shop they also installed machinery to drive a dynamo and he had to be in charge of it all.

We were very glad when we were going to move to the new print shop. It was a very much better building with sufficient daylight and electric light. The presses and other machines were all hooked up with the steam power. In my trade I learned things away ahead of time before I was asked to do them. Most of it was of necessity only. It happened one time however, that one of the boys, who had been at the trade two years longer than I, was told to imposition a 16 page booklet. But he did not know how to do it and asked the boss to show him. The boss thought he should know, and therefor told him it was a shame he didn’t know that yet. Turning around he pointed at me and said I will let him do it, I trust he will know. I felt kind of sorry for the two years older boy, but was glad to do it and finished it without asking questions, ready for the press. Later in this autobiography we hope to mention this boy again.

From step to step I learned the trade – all I could in that print shop. Especially the fundamentals I got fixed in my mind and later in life made good use of them.

When I was close to 16 years old my brother left the orphan’s home and was hired out by a country blacksmith. He had to work hard and long hours and the food was not very plentiful and of the quality he needed in his physical condition and his lung trouble returned. My sister’s friend, a widower with 3 children took pity on him and told him to come to Amsterdam. My brother went to that city and found work tending a machine to drive beams into the ground for the foundations of the new post office. This new building was erected across the rear of the palace of Queen Wilhelmina. This was his last work. It was not too hard, but the damage to his lungs was done by over exertion at this country blacksmith. He was taken to the hospital and about a month before he died, my sister’s friend got permission from the orphan’s home for me to come over so I could see my brother when he was still alive.

My sister was still working for the same people, as I mentioned before, a retired publisher with his two maiden daughters. The gentleman took a liking to me and we went together to an exposition of printing arts. They were printing a picture of a proud peacock in natural colors. It was very interesting for me.
After the death of my brother I had at times very serious thoughts and did not approve of all the books that were in the orphan’s home library and also listened better to the sermons in church. I remember one time the preacher used an illustration to point out that many times people don’t know that salvation can be had for the taking and they keep on asking. It is with them as with some shipwrecked people that had drifted with their craft into the water of the Amazon River, thinking they were still in mid-ocean. When they saw a boat passing they cried “Water, water, give us a drink!” they were then told, “Dip in, Dip up, for the water is sweet.” During this time I had also personally experienced that the Lord can and will answer prayer when we call upon His Name to fight sin. Of necessity there was not close personal contact with the boys of teen age by older people to guide and warn them. I had been abusing myself and after sometime I realized I was greatly sinning. I felt the need of grace to quit and I found through prayer that I could overcome this sin.