Editor’s Note: We offer another article from Jasper Thorsson.
Greeks gave the West form and ambition, but the Christ gave the West its soul and hope.
Judaism was given all the tools necessary to be the standard-bearer of all Wisdom and to demonstrate God’s love and justice to the world, but missed the point in thinking the banner was theirs instead of God’s. Still, in some areas they are much more zealous for God’s commandments in their true form—even though they do not focus purely on His Word.
For a moment, lets review the most critical point in the Old Testament: When God took the People of Promise—Abraham’s seed and the foreigners who had joined with them—and gave them the first explanation of His Ways: the Ten Commandments. By these, they would be known as His People, and this foundation is still the cornerstone of our laws today—we need look only to the many legal assaults on courthouse depictions of them to reassure ourselves. 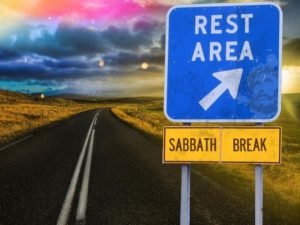 Of these Ten Commands that God saw fit to write with His own hand, there is one that has been thoroughly rejected for years which was once enshrined in every town: the keeping of the Sabbath. It is interesting to me, then, that the legal defense of Sabbath peace in this country really skyrocketed after the First Civil War in an attempt to preserve some of the old ways and traditions and morality in the face of rapid industrialization and growing religious and cultural dissonance. (Editor’s Note: The focus is on the concept of Sabbath here, not an argument about Saturdays or Sundays).
After the tumultuous events of the early 20th century and the great influx of European Jewry to the US, the incredibly influential Abraham Joshua Heschel published a formative book titled The Sabbath. In it, he mixes poetry and story, teaching and parable alike out of a clear, deep love of the Sabbath and the precious Truth about G-d and our place before Him. It was in many ways a return, a point of commonality between the newcomers and those who invited them into this blessed land, and I learned much good from its reading. I must include a caution for discernment, however, as by estimation only I would say he sources equally from the Torah, rabbinical teachings, and teachings from the mystics or Kabbalah. These last can be tricky so approach with discernment and caution; many would say in simplification that they are the Jewish equivalent of a cult, whether relatively benign like Mormonism or radioactive like the Occult proper but it remains that their teachings have as storied and lengthy a tradition as the orthodox rabbis.
As a taste of his work, which transitions from theoretical to practical and spiritual to passionate throughout, I present this quote from the book, page 98 in my edition:

“Technical civilization, we have said, is man’s triumph over space. Yet time remains impervious. We can overcome distance but can neither recapture the past nor dig out the future. Man transcends space, and time transcends man.
Time is man’s greatest challenge. We all take part in a procession through its realm which never comes to an end but are unable to gain a foothold in it. Its reality is apart and away from us. Space is exposed to our will; we may shape and change the things in space as we please. Time, however, is beyond out reach, beyond our power. It is both near and far, intrinsic to all experience and transcending all experience. It belongs exclusively to God…
We must conquer space in order to sanctify time. All week long we are called upon to sanctify life through employing things of space. On the Sabbath it is given us to share in the holiness that is in the heart of time. Even when the soul is seared, even when no prayer can come out of our tightened throats, the clean, silent rest of the Sabbath leads us to a realm of endless peace, or to the beginning of an awareness of what eternity means. There are few ideas in the world of thought which contain so much spiritual power as the idea of the Sabbath. Aeons hence, when of many of our cherished theories only shreds will remain, that cosmic tapestry will continue to shine.
Eternity utters a day.”

It is a short work, 118 pages with the references in the back, and I would encourage you, reader, to consider the importance of a Sabbath, what it is and what it means. Who practices it, what does it do, and what it means that G-d commanded it are all interesting and foundational questions to our lifestyle.
The Sabbath is one of the gifts that G-d gave to his people as a large part of their core identity after freeing them from slavery to the powers of the world. What does it mean that the West is rejecting this, along with the others? Perhaps the Sabbath was simply the path of least resistance that enemies of light and truth could take from our hands. Perhaps it is a simple following of how we have failed to enforce a culture that honors G-d and His ways, as so we trickle, family by family, back into slavery to taskmasters with large ambitions and great corporate organizations to their strange and alien gods.
Do you practice a Sabbath? Do you feel strongly about a specific day, or practice of rest? How does it strike you that this was equal to “Thou shalt not murder” in the eyes of G-d? I encourage you to wrestle with these ideas, and seek out books like The Sabbath to chew on. Take your lifestyle seriously, and if you be Western, consider what it means.
Leave a comment below, we Men of the West love to discuss what it means to be Western, in happy pride and the glow of the peace of our Lord.
Share this

Sunshine and Storm in Rhodesia (Part 28)

The Fall of the Greek Empire (Part 1)