If the Progressives cannot bully you into silence, if they cannot threaten your livelihood, if they cannot get you to bow and scrape before them, if their plans are disrupted, they turn to predatory violence, either in threats or in actions.
It’s what they have always done.
Violence comes in two flavors, predatory or protective. Neither one has any moral weight because both are tools to be used. Only the man behind the violence can make moral decisions. 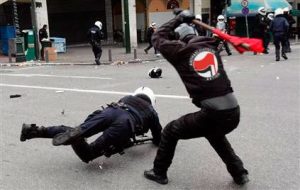 This isn’t theoretical blathering. We’ve entered an era where the Progressive’s frustration and arrogance are pushing them out from their recent tactics of cry-bullying, which has worked for so long, and into a corner where now the rats are lashing out.
From Antifa attacking people with bike locks and throwing their piss at people they don’t like we can see they are escalating past shouted slogans and poorly made signs. Punching Nazis*  was just the start.
The Democrats have long been been advocates of violence. From the 60s radical left bombers like Bill Ayers, who was the ghostwriter for Obama (SJWs always project, lie, and double-down. He wasn’t asked about it, he volunteered the information, thinking he was being funny, but instead he tipped his hand completely.) to the socialist nut Obama himself who masqueraded as President for eight years, they always push for more violence.
Now with Congressman Steve Scalise having been shot by Bernie Bro James Hodgkinson, who had a list to others to kill, the mask is off. They are barbarians bent on dominating others.
Of course, they are going to lie about it. Watch the Antifa videos. They cry for blood then cry when things don’t go their way. Over and over again.
They follow the father of lies. The rank and file don’t know it, but the people controlling them do understand what they are about. This has always been a spiritual war. God’s freedom versus Satan’s slavery.
Things are going to get worse. They know nothing is working. Their agenda is being undermined and overwhelmed by armies of deplorables and pepes. They’ll turn to predatory violence more often.
We better be ready with our own.

*Nazis are anyone they disagree with for any reason about anything. Adherence to the Nationalsozialistische Deutsche Arbeiterpartei creed not necessary.

David Jones on Soldiers and Rifles

A Prayer by Sir Francis Drake