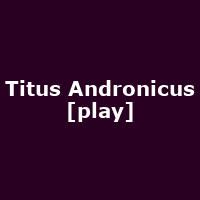 Shakespeare’s tragedies are always marked by death. Hamlet ends with most of the main cast dead. Macbeth sees everyone important killed off, including the titular character.

But Titus is different in scope and intensity. At the end, after wading through the blood of nearly the entire cast, only four characters are left standing and one of those, Aaron the Moor, is sentenced to death. All told, there are fourteen deaths, nine on stage, and one live burial. Plus a violent rape and sons baked into pies and served to guests. Violent and brutal, it was keeping with the Elizabethan trends of the time, where audiences wanted to be entertained with stories that had the embodiment of Revenge (Titus) and of Evil (Aaron) locked in a struggle to the death.

For those that haven’t experience it, or did back in high school when such things were taught but it’s now a hazy memory, here is a summary of the blood-soaked plot:

At the start of the play, the old Emperor’s sons, Saturninus and Bassianus, were arguing over who should be the next Emperor. They are interrupted when tribune, Marcus Andronicus, comes in to announce the people have chosen Titus Andronicus for Emperor.

Titus Andronicus is a Roman general who has returned to his Rome after a long and bloody struggle with the Goths, a war that left only four of his sons alive. He had captured Tamora, the queen of Goths, her three sons, and her secret Moor lover, Aaron. In accordance with Roman custom, he kills her oldest son. Tamora begged with Titus not kill her son and pleaded for mercy, which Titus denies harshly. She then turns to revenge and vows to destroy Titus and his whole house.

Titus turns down being Emperor and supports Saturninus in his stead and promises his fair daughter, Lavinia, for the Emperor to wed. She’s betrothed to another but Titus sees the marriage to the Emperor as overriding any prior commitments.

Titus’s sons and Lavinia’s suitor, Bassianus the new Emperor’s brother, argue with Titus over the impropriety of Titus marrying off Lavinia to another when she was already engaged to Bassianus. Titus, in a rage, kills one of his sons for treason against Rome. Saturninus is disgusted by the turn of events and seeking to neutralize their political power washes his hands of the Andronici family. He weds Tamora instead.

Drunk on power as Empress, Tamora starts the machinery for Titus’s destruction. She plots with Aaron to have Bassianus killed and his death blamed on two of Titus’ sons, which Aaron carries out skillfully. The Emperor is engaged and has the sons captured and announces they will be beheaded in retaliation. Aaron lies to Titus and says the Emperor would be mollified if a family member chops off a hand in exchange for his son’s lives. Titus agrees and has his left hand cut off. He sends it by courier to Rome but instead of a pardon, he receives the heads of his sons and his severed hand in response to mock him.

Not satiated, Tamora unleashes her two sons, Demetrius and Chiron, on Lavinia. They rape her then cut off her hands and her tongue so she can’t implicate them. She is left alive, ruined and despoiled. Titus sends his last living son, Lucius, from Rome to stir up the Goths to march on Rome.

The Empress gives birth to a black baby. The Emperor is in a rage so Aaron takes his child and escapes. Before Aaron flees, Shakespeare sets up what might be the first “your momma” joke of the Elizabethan age.

DEMETRIUS: Villain, what hast thou done?

AARON: That which thou canst not undo.

CHIRON: Thou hast undone our mother.

AARON: Villain, I have done thy mother.

Aaron kills the nurse and flees with his son but both are captured by Lucius as he marches toward Rome. Lucius threatens to kill Aaron’s son and he confesses the entire plot.

Lavinia writes the names of her attackers in the dirt and reveals to Titus who was behind her assault.

With each disaster and setback, Titus exhibits more mental instability, leading people to believe he was going mad.

In an effort to further destroy Titus, Tamora tries to play on his seeming madness by dressing up herself and her two sons in costume to appear before Titus as the spirits of Revenge, Murder, and Rape. She promises justice against his enemies if he stops Lucius from attacking. Titus agrees and suggests a feast to be held for his son, the Emperor and Tamora to reach reconciliation. Tamora agrees and as she starts to leave, Titus insists Murder and Rape remain with him. She consents and returns to the Imperial palace.

As soon as their mother had left, Titus kills her sons, drains their blood into a basin held by Lavinia, and bakes them into pies.

During the feast, Titus asks the Emperor if a father should kill a daughter that had been raped. The Emperor agrees that he should. Titus kills his daughter and then tells the Emperor of her rape. The Emperor demands to see Demetrius and Chiron. Titus reveals they were baked into the pie they had been eating. Titus kills the stunned Empress. The Emperor kills Titus. Lucius avenges his father and kills the Emperor. He is made Emperor and orders Aaron to be buried alive up to his neck and to die of thirst and starvation. Aaron says he’s glad of the evil he did and his regret was he couldn’t do more evil.

This is one of Shakespeare’s first plays, if not the first to bear his name. The language is rough. The characters aren’t as well-developed. The plot has pacing problems compared to his later plays. It offers a strong argument that he had collaborators. Even though it is considered to be one of the worst plays, I suggest it is one of his more morally complicated plays.

Titus had been placed between a rock and a hard place. Tradition and religion demanded he kill one of his captor’s sons in retribution for the deaths of his sons. Tamora pleads for mercy, a noble trait. Titus chooses to follow Roman custom and kills the Goth queen’s son and that kicks of the Senecan tragedy of revenge, death, and destruction.

Titus, from a position of tradition and proper civic behavior, chose correctly. He still loses. At first, he tries at every turn to do the right thing and he still loses. He watches as his family is destroyed in front of his eyes and he is incapable of stopping it, no matter what he attempts to do. It takes a descent to madness to outthink his enemies. Finally, when he is able to something, he kills Tamora’s sons, turns them into pies that he serves to their mother. He kills her and is killed in turn.

Titus loses despite making correct choices. His errors serve as a force-multiplier to his tragedies.

Tamora seeks her revenge and succeeds. But then she can’t stop. She keeps plotting and scheming long after Titus has been bloodied and broken. It’s her series of successes that lead to her eventual downfall and death at the hands of the Senecan hero, Titus.

The plot swirls around these two characters as they both seek what they believe is due to them. In the end, they both get what they want, and they both lose.

The moral complexity arises from that initial choice Titus makes, whether it is best to follow the dictates of tradition and civic duty or to grant mercy to a powerless enemy in one’s control. Each decision after is affected by that first choice. Titus struggles to enact his revenge within the bounds of social propriety but it is only when he sheds the last civil restraints and bonds of civilized behavior can he finally have his revenge. His triumph lasts for the blink of an eye because he, too, is killed.

How does this differ from modern stories of violence, like the Game of Thrones series?

While Game of Thrones is an exercise in Hobbesian brutality combined with Nietzschean nihilism and will to power, Titus Andronicus places the titular Titus in difficult straits, not because of his overweening pride or lust to power but because he chose to follow one acceptable path over the other at the very start. That choice is what caused him so much loss and heartache. The brutality in the play was part in response to the demands of the time and partly due to a budding playwright experimenting in his field. That and the Elizabethans were a bloodthirsty lot.

Titus serves as a warning that a man can be at the top of his game, very successful, acting according to tradition and expectations, and still lose. He can do everything that is expected and still end up with nothing. Seeking revenge can easily take you to places darker than you imagine and should you achieve victory it will be short lived.

What Does Trump Know?

A Time For Choosing, by Ronald Reagan