One month ago today, safe spaces were destroyed, butts were hurt, and the California drought ended because of the flood of liberal tears. Donald Trump, the man they said couldn’t win, the man they lied about and constantly defamed, was elected the 45th President of the United States of America. There were protests, minor riots and yes, some people were hurt. Most people thought it would all die down after a few days, and we’d get on with the business of being Americans again. Those people were wrong. Today, Trump has a 55% approval rating.
Trump, without even having taken office yet, is doing things the Obama Administration failed to do, either because of a lack of will, lack of interest, plain incompetence or some combination thereof. He saved 1000 jobs from going to Mexico by negotiating with Carrier. He also negotiated a deal with a Japanese bank that will bring 50,000 jobs to our shores (with a minimum $50B investment). He’s doing this while Obama has managed to achieve near record lows in the Labor Force Participation Rate; that means more people than ever have completely dropped out of the job market and are no longer counted as being unemployed. Speaking of things Obama couldn’t get done, Trump’s election has caused Russian President, Putin to back off, and we’re no longer on the brink of World War III. And to top it all off, Canada and Mexico have already shown a willingness to renegotiate NAFTA. After Trump takes office, any positive job report, economic news, etc. that comes out will be credited by the left to Obama for setting the stage for it and anything negative will of course rest squarely at Trump’s feet. 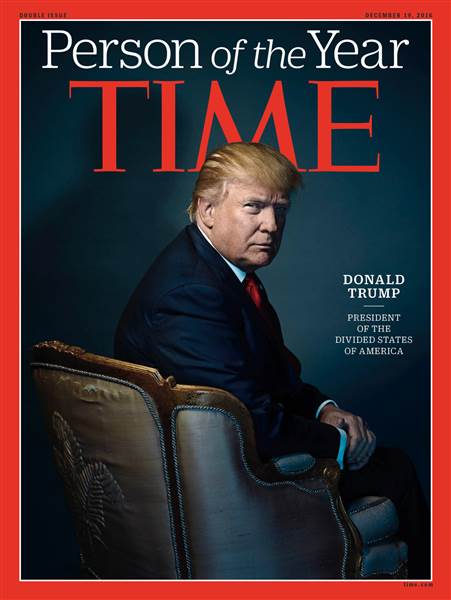 Trump was just named Time Magazine’s Man Person of the Year for 2016. They couldn’t just congratulate him of course, because they’re a leftist rag. They had to continue to manufacture outrage by saying “President of the Divided States of America.” And divided we are, but it’s not because of us, those of us who welcomed the decisive defeat of Hillary Clinton, if not the victory of Trump himself. Let’s look back to previous elections: Obama had his detractors, but rather than cry and pound our chests and riot and beat people up, we went and bought guns, and learned how to be more self-sufficient and to prepare for the various possibilities that could play out. Obama has been the best gun salesman this country has ever known. All of the hysteria is coming from the special snowflakes on the American left.
Meanwhile on the “progressive” left, the tears have dried up, but the rage is still there. They’re still crowing about the fact that Hillary got the poular vote. There has been a constant barrage of death threats against Trump on social media. Jill Stein raised over $7,000,000 dollars to attempt to force recounts in 3 states that Trump won, in order to give those electoral votes to Hillary. The Wisconsin recount has given more votes to Trump, and it looks highly unlikely that Pennsylvania or Michigan will get a recount at all. They did a recount in Philly, and it didn’t change anything. Hillary picked up 5 additional votes. Some say the strategy is to drag out recounts so those states can’t seat electors on Dec. 19th. And then there are the electors themselves. The Hillary supporters have been harassing and threatening electors constantly since the election. Death threats against electors! The Oath Keepers organization issued a standing offer to protect any electors that felt threatened. A few electors have said they would not vote for Trump, and one in Texas resigned rather than either voting for Trump or being known for the rest of his miserable life as a “faithless elector.”
Trump is taking massive criticism from the left over his cabinet choices, especially that of Jim “Mad Dog” Mattis (USMC Retired), perhaps the greatest military General of our age, to be the Secretary of Defense.
Aside from all of that, Trump has, on a number of occasions, bypassed the media and addressed the American people directly. He Tweets constantly and doesn’t seem to care about “political protocol” or the media gatekeepers. He also doesn’t seem to care about standard diplomatic protocol. Even a bunch of traditional conservative politicians and pundits excoriated Trump for talking directly to various world leaders, especially the President of Taiwan, without going through the US Diplomatic Corps or seeking permission from China first. In fact, quite a few world leaders chimed in and said they were eager to work with Trump. The old media has been deprecated, they know they’re no longer relevant to the American people. They pushed fake news, and fake polls designed to shape opinion rather than reflect it, and they paid the price. They gambled and lost and the American people are wise to their game.
Between now and Inauguration Day, we expect a lot more to happen; we’ll do another major update then.

Yair Rosenberg is a Liar and Coward