Considering the North American continent to be savage and uncivilized, and in need of British influence, British apologists called on their fellow Englishmen to redeem the land, as directed by God’s Providence (James, p. 12). Not only where the native inhabitants of North America savage, but they failed to utilize the natural resources of the land. This caused many English to declare that the natives had forfeited their right to the land, opening the door for colonization. These same arguments would later be made in other regions, including Asia, Africa, and Australia.
In order for this movement to succeed, the immigrants had to understand and agree that the Native Americans had no real claim on the land. Early reports from missionaries and explorers lent credence to that understanding. Native Americans, West Indians, and even black slaves imported by Europeans, with very different social customs and traditions than the Europeans, were viewed as cannibals, brutes, and a source of revulsion (James, p. 13, 20-22). As revolting as they were to the British, they were also viewed as easy prey, not really standing in the way of European “progress.” This is another sort of propaganda, which might cause a wavering immigrant to think the task of populating and controlling a wild continent might be easy. 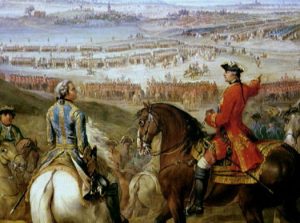 Another perspective on this situation was provided by religious authorities, who saw the Native Americans as a prime target for evangelization. Viewed as idolaters, missionaries began to make contact, hoping to convert the heathens to Christianity, as well as improving their status as uncivilized. It was thought that by converting and educating the natives, both the British and the natives would be improved. Not only would this provide for the growth of British civilization, but a new ally would be engendered (James, p. 13-14). This would appeal to kind-hearted and religious zealots, prompting some of them to consider immigration. Ultimately, this plan did not work, and the settlers turned to exterminating the natives, which would attract a different sort of immigrant.
“England joined Christian liberty with political liberty in a powerful apocalyptic vision that projected universal reform” (Williamson, p. 235). In this sense, England considered itself a bulwark of Protestant righteousness, opposed to satanic Roman Catholicism, as manifested in the Spanish Empire (ibid., p. 236). This religious impetus was behind much of the propaganda advocating colonization, both of the American Continent and the West Indies (James, p. 16).
In the east, while the Dutch had made inroads into India, British interests soon came to proliferate. In order to establish economic dominance, Britain was forced to keep an “impressive public face” (James, p. 26). These Indians were viewed as harmless, though still not taking advantage of the natural resources of their country.
The goal of settlers may well have been the promise of wealth and power, but the underlying principles behind the colonization dealt with the desire to spread British civilization, the education and enlightenment of a backward people, and primarily the desire to fulfill a perceived religious mandate to spread the truth of Protestantism, curtailing the influence of Catholicism.
Works Cited:
James, Lawrence. The Rise and Fall of the British Empire. New York, St. Martin’s Griffin, 1994.
Williamson, Arthur H. “An Empire to End Empire: The Dynamic of Early Modern British Expansion.” Huntington Library Quarterly, Vol. 68, No. 1-2 (March 2005), (pp. 227-256).

Analysis of "For the Soul of Mankind"