C.S. Lewis was a Christian powerhouse. He turned his intellectual and mental gifts to the defense and explanation of Christianity like few before or since. 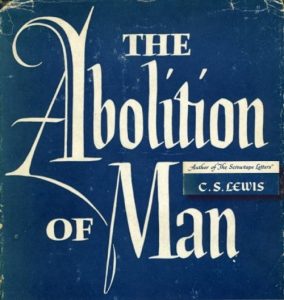 The Abolition of Man is one of his best works.

It doesn’t seem to be very widely ready anymore, which is a shame, but there’s still a lot that has been written about it, easily found on the internet.

Lewis starts out with defending the proper use of English. I know, if you haven’t read this book, that almost makes no sense. He takes this line of attack and, with his customary skill and grace, cleaves to the heart of modernism’s lies.

We’re told that subjective opinion is the most important thing, as long as it conforms with popular opinion.

Lewis cuts through the confusion and exposes that lie for what it is: an attempt to deny objective truth.

He compares this to the Tao, something that is natural law, it exists outside out our preferences and wants. He posits that all societies touch upon the Tao. I’m going to extend that say all sane societies have to root themselves in the Tao or they cannot function very long and will either implode from their own internal rot or be conquered by another civilization, no matter how bloody in tooth and nail, that has roots, no matter how tenuous, in the Tao.

Reason cannot determine what is objectively right or wrong. The emotions, which he attributes to the belly, are in the same shape. Neither can discover the Tao. Neither can root themselves in its nurturing soil. Neither unlocks the powers of Heaven that await for the humble heart and contrite spirit to bow a head to the great King of Kings, the Author and Finisher of the Tao, to bless and guide them.

“The head rules the belly through the chest–the seat, as Alanus tells us, of Magnanimity — Sentiment — these are the indispensable liaison officers between cerebral man and visceral man.  It may even be said that it is by this middle element that man is man: for by his intellect he is mere spirit and by his appetite mere animal.”

Without that middle element, if we listen to the modern lies of subjectivity is the only real, then through that twisted path do we become Men Without Chests. Men without Character, tossed to and fro by Reason’s unhealthy grip of our appetites.

Lewis explains why the rejection of the objective leads to confusion.

“This thing which I have called for convenience the Tao, and which others may call Natural Law or Traditional Morality or the First Principles of Practical Reason or the First Platitudes, is not one among a series of possible systems of value. It is the sole source of all value judgments. If it is rejected, all value is rejected. If any value is retained, it is retained. The effort to refute it and raise a new system of value in its place is self-contradictory. There never has been, and never will be, a radically new judgment of value in the history of the world.” 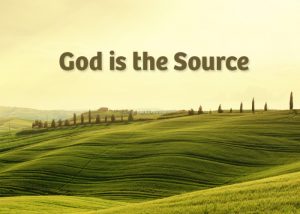 All Natural Law flows from the Tao. God is the ultimate source of the Tao. Humanity lays ahold on parts and builds societies and civilizations based on their understanding of the Tao. If you reject the Tao, you reject all object value, and by extension, all values. If you accept objective value, you hold part of the Tao in your character.

This is why socialism fails. This is why communism fails. This is why the Progressives will fail. All those systems reject the Tao and attempt to construct a new judgment of value. It’s impossible. Man, being man, can keep a system going, but even our powers have limits, and once those limits hit, collapse is inevitable and certain as the sun rises in the east.

Today, we are told all things of the past are superstitions, to be discarded as a growing snake sheds its now too-tight skin. There no is allegiance, we are told, to the past or to our old future, but to some vague Humanity that is only defined as having no Character.

They saw at the branch upon which they sit, thinking to break free from the tree of the Tao, but they cut closer to the trunk, cutting themselves off from sanity and objective reality. The New Man must come forth, we are scolded, a man that isn’t a man but is all sexes and races and is none of them.

“The human mind has no more power of inventing a new value than of imagining a new primary colour, or, indeed, of creating a new sun and a new sky for it to move in.”

The Progressives look up at the sun and curse his rule above, and think to overthrow him through rejection of the sky. The burden of being fully human is too great for them, so they burrow into the muck, crawling on their bellies, pulling down any whose Character has been rendered weak by their poisons, and in doing so, become less than the beasts.

Should the Progressives succeed for a time, their rule will inhuman, because Man, stripped of Character, is no longer in the Image of God, but whatever the rules make him out to be, as far as their Heads can carry their vision and as far as their Belly controls their appetites.

We’re seeing that now. Those that reject the objective truth of two and only two sexes have no Character. They use their Reason to justify their Appetites. They enslave science, not to lift up and point us to the stars, but to refine their self-mutilations in their frenzy of delusion and madness rotting in their souls.

We see Pride lifted as a virtue, waved from flags, shouted in our streets, sung its praises, lauded by the rich and popular, just as virtue itself is scorned and mocked and accused of having too much pride to accept something different.

The cure has always been the same. Accept objective reality and the King that stands behind it and uplifts it. Reject the sickly lies of subjectivity and the false value system that’s offered by the Left.

Develop Character and cling to the Word of God. The very gates of Hell will not prevail against your eternal soul, though your flesh be broken and rent by their inhuman claws.