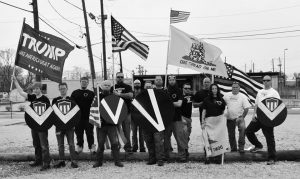 On Sunday, July 2, 2017, all over the nation, in 38 locations, there will be Impeach Trump marches. We all know that a bunch of pansy liberals marching and shouting and crying out liberal tears will not result in impeachment proceedings against President Trump, but the events will provide many of you with the perfect opportunity to get some ground experience and see the culture war up close.
You can find a list of the locations right here. I encourage you to keep an eye on the discussion on the Facebook page for the event nearest you. Normally I wouldn’t want to give them link traffic but locations might change, etc., so I want you to have the most accurate information available.

Start Nothing – Finish Everything

I’m not going to get in to why they’re marching or what flimsy grounds they think they have to impeach him, it doesn’t matter. In each and every location, you’ll get the opportunity to see angry liberals and their militants (Antifa, etc) in action. You might even get to punch a commie like I did back on May 1st.
What will you encounter? Depending on the location you attend, there will be varying crowd sizes as well as displays of firearms. In Texas for example, we can open carry long rifles with no permit. Antifa and Austin Red Guards have already proven they are willing to arm themselves even with no training whatsoever. Be prepared for violence. The level of violence in any given location will depend on a combination of police presence, and the ratio of those marching to the opposition (us). You might expect to see rocks and bottles thrown as well as direct assaults.
Do not physically engage first, that could get you put in jail. There will be lots of cameras around each event so you can bet that if you hit first, you could very well pay for it. Taunting is fine though; be an agitator. Start nothing, finish everything. Get trophies if you can.

Prepare Ahead of Time

The most important thing is to show up as I said before. Bring your friends. Recruit the people that are sitting on the fence. Get them to come and see the lunacy for themselves in order to strengthen their resolve. A couple of your humble authors will be at the Austin event and I’ll be giving a detailed report after it’s over. Also, for those of you in Texas, there is an additional event in Austin on July 1st. The 1776 Freedom March. Antifa and the communists will be out in force to try to shout us down, but we’re not going to let that happen.

Sermon: Picture of a Prophet

The Abolition of Man by C.S. Lewis