How and When Did the Cold War Begin?
It is commonly accepted that the Cold War began soon after World War II ended, as the capitalist United States (US) and the communist Soviet Union vied with one another for global dominance. This is a simplistic model; the reality is much more complex. It is difficult to set a specific date (or even year) for when the Cold War began, as tensions had existed between the two nations for decades before World War II. This complexity is exacerbated because these tensions existed between the US and Russia, before the Russian Revolution brought the Soviets into power. One must consider how much influence those prior tensions had on the relationship between the two powers after the change in power. Walter LaFeber offers several important considerations, based upon the historic situation. While LaFeber’s book does set the beginning of the Cold War in 1945, he clearly shows that it did not spontaneously erupt, but was the result of a gradual antagonistic relationship between the two nations. In fact, not only did the conflict not begin in 1945, but the relationship was strained long before the 1917 revolution in Russia (LaFeber, p. 1). Both nations had expanding empires in the 19th Century, and they inevitably collided. When this happened, their different political structures, economic expectations, and opinions on human rights led to a strained relationship (LaFeber, p. 2-3). Two World Wars disrupted the potential conflict, as both nations fought on the same side in these wars, though the negative attitudes were not alleviated (LaFeber, p. 3). So the Cold War actually began in the late 19th Century as two antagonistic empires collided at the fringes of their borders of influence, but was not officially recognized or focused upon until after World War II, when they became the two dominant international powers, each trying to consolidate power and stability, while minimizing the influence of the other.
If it is possible to determine, according to LaFeber, that the Cold War formerly began in 1945 as the culmination of decades of strained relations, it is much more complex to determine exactly how it reached that point. It is not difficult to see how two strong military powers might come into conflict over a disputed region, and that happened in China in the late 19th century. While Russia had ceded territories in the Americas easily, they were not so compliant with American desires on other continents (LaFeber, p. 1). Both nations believed they operated under a mandate from God, with the Americans following their “manifest destiny” and the Russian Tsar being viewed as “an instrument of God’s will” (LaFeber, p. 2). With that understanding, it is easy to see how each would resist the other.
The differing political structures of each nation also led to strained tensions, especially regarding economic matters, and that antagonism continued throughout the conflict, and into the 21st century. The rigid bureaucratic nature of the Russian Empire did not lend itself well to innovation or invention, while the federal system of the US did. Eventually, this led to adoption of Western technology in Russia. American businesses wanted to develop technology and business opportunities, but Russia was likely to close off trade in its territories with foreign markets, as they could not compete (LaFeber, p.2). So while the US was pushing for open markets, the Russians were closing them. In order to contain the Russians, the US tended to support Japan in opposition to the Russians.
Besides the economic concerns, there were brutal reprisals against political dissenters in Russia in the late 19th century, as well as increased pogroms against Jews. In an America where freedom of speech and religion were important components of the legal system, the Russian approach did not set well. There were threats from the US of cessation of trade and even desires for Russian regime change (LaFeber, p. 2). This different outlook on human rights was an important consideration in any political discussions between the two nations. It was even a concern during World War I, when the Wilson administration saw, correctly, that there was no good outcome of that conflict, at least for the US. If Germany won, militarism would rule, but if the allies (including both the US and Russia) won, then Russia would dominate Europe (LaFeber, p. 3). 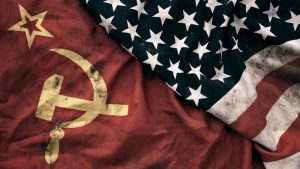 The SKS rifle: Inexpensive, Not Cheap