“The SKS is a Soviet semi-automatic carbine chambered for the 7.62×39mm round, designed in 1943 by Sergei Gavrilovich Simonov. Its complete designation, SKS-45, is an initialism for Samozaryadnyj Karabin sistemy Simonova, 1945 (Russian: Самозарядный карабин системы Симонова, 1945; Self-loading Carbine of (the) Simonov system, 1945). In the early 1950s, the Soviets took the SKS carbine out of front-line service and replaced it with the AK-47; however, the SKS remained in second-line service for decades.”[1]
I bought one several years ago, a Yugoslavian made model, for $200.

The Good: It’s a solid rifle. Real wood, strong metal components, decent trigger pull weight for something this old. It doesn’t take a whole lot to maintain it. You can field strip it without tools. I think everything on mine is still original and working fine.

You can put on a bayonet and the Yugos have grenade launching option which is more of a novelty now. The iron sights are good to at least 100 yards. 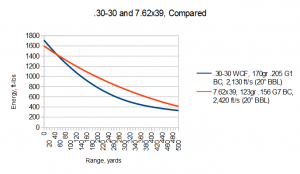 The 7.62x39mm round is similar to the .30-30 and because of the weight it doesn’t kick very much.
The Bad: Stripper clips. They work, sure, but the speed difference in reloading vs something with a magazine like the AK-47 or AR-15 is significant. You can buy third-party mods to switch to magazines but the reports are mixed about the reliability. It’s hard to mount a scope. No rail system at all, in fact, so you can’t dress it up like an AR-15. It’s heavy. Real wood and iron have a real weight to them. Since they are old, a lot of them have really crappy barrels and other issues. Parts are a little hard to come by, too.
You

can buy aftermarket parts to change nearly everything on it. You could change the rifle so it hardly resembles the original.
Might as well get a different rifle if that’s your plan. AKs start pretty much where the modified SKS end up.
So why get one at all?
Great plinkers. Ammo isn’t too expensive to get several boxes and go shooting. Aside from loading the stripper clips, it’s easy to shoot and because the kick isn’t harsh anyone can shoot it.
This isn’t meant to be your main battle rifle. This is more of a cheap addition to your collection and one you can hand out during a zombie apocalypse to an under-prepared neighbor.
USSR and Romanian built rifles are generally the best ones. Chinese hardware is poor but they lined their barrels with chrome. Yugos are in between.
Because the quality varies so much don’t buy one without checking it out, especially the bore of the barrel. Don’t pay over $300. Gunbroker.com has them up to $600 which is freaking insane. At that price, you can get a decent AR-15 for not much more, and the AR is a far superior platform.
[1] https://infogalactic.com/info/SKS