What Is This Book About?

Asser’s biography of Alfred the Great is the oldest known biography of an Anglo-Saxon king (p. 48). It serves as a totem for the respect that Asser had for Alfred, as they had a close relationship (p. 56). It presents the work of Alfred, as undertook a program of increasing literacy and education among the Anglo-Saxon people, as well as how he established his authority over the various Anglo-Saxon kingdoms, and unified them. While Alfred’s military success was impressive, his cultural impact was staggering (p. 10).

Utilizing a similar framework as the Anglo-Saxon Chronicle (compiled under the authority of Alfred), Asser presents a chronological history of Anglo-Saxon society, with particular focus upon Alfred. On occasion, Asser even reminds his readers that his content is moving too far from his true topic, and so redirects the narrative back to Alfred.

The modern reader finds that Alfred, while respected by his contemporaries, was not considered “great” until the sixteenth century (p. 48). In part due to Asser’s biography, later readers came to understand that Alfred’s social improvement programs had impacted English society in profound ways, and the historical distance allowed for this elevation of Alfred’s reputation.

Through the time period under consideration, the biography shows how Alfred expanded his influence, politically, educationally, and religiously. Asser provides details that explain how and why Alfred decided to undertake specific actions, focusing upon how Alfred intended to bring education back to the people, within a Christian worldview. As a clergyman, Asser was motivated not only by Alfred’s devotion to learning, but to God.

Why Did The Scholar Write The Book?

The book was apparently intended for a Welsh audience, in order to highlight the value in following a Godly king, such as Alfred. However, it never had a large Welsh readership. In fact, the book retained only minor influence for several centuries. It was written to show that Alfred maintained an “ordered” life, in peace and war, and was a worthy subject to follow and emulate (p. 10).

Asser hoped to show that Alfred was a God-appointed ruler who cared for his people, in spite of his own infirmities. He established schools, translated important books, and shared his passion for education with the inhabitants of his kingdom. This biography shows that while Alfred was definitely of a royal lineage, he went beyond all expectations and shifted Anglo-Saxon society in a positive way by his reforms and guidance. Unlike his immediate predecessors, many of who were fine rulers, Alfred was a unifying force and inspirational leader who turned the tide of rising ignorance, and introduced a new worldview to his people.

In one sense, Asser also hopes to show that just as Charlemagne was a God-appointed leader who transformed a culture, so Alfred was such a man, for the Anglo-Saxons (and Welsh). In fact, the influence of contemporary biographies of Charlemagne was influential in the writing of Alfred’s story (p. 55). The book was most likely not a simple biography, as there is no ending, though Asser outlived Alfred. It is apparent that the book was never completed. So the reader must assume that these underlying purposes were the primary motivation for the work.

What Is The Main Thesis/Argument Of The Book?

As previously mentioned, Asser intended to present Alfred as a divinely inspired leader of the Anglo-Saxon people. Not only was Alfred an efficient and effective political ruler, but a wonderful educator, translator, and Christian. For Asser, all of these things were integrated into the character of the man. Each was a defining characteristic that demonstrated Alfred’s fitness for rule and lasting influence. 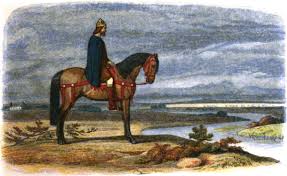 Asser’s assertion is that while Alfred was facing overwhelming odds, whether in becoming king (since he was the youngest son), defeating Viking armies, dealing with infirmities, or promoting literacy amongst the Anglo-Saxon people, he never failed in his devotion to God, nor his dedication to those under his rule. Always, he did what he deemed to be correct, even if such actions were injurious to himself.

The intended reader of the work should come away with the satisfaction that their king is (or was) truly a great man, worthy of adulation. Alfred is shown to be faithful, tenacious, and kind. He was willing to share his wealth with others, where it could bring good to others. He demanded judicial honesty and fairness, and revolutionized the legal system of the day.
All in all, Asser simply intended to provide biographical evidence that Alfred was the right man for the job, and was ordained by God to lead the people. He was a faithful man, who accomplished his charge faithfully, and accomplished what God had given him to do. The intention was to “give some idea of the character of King Alfred” (p. 110).

What Are The Main Ways In Which The Scholars Support The Thesis/Argument?

Divided into two major portions, with a short personal aside separating them, the book covers the life and influence of Alfred, first in a chronological, then a qualitative, manner (p. 55). The largest section, composed of the first 86 chapters of the work, present a basic chronological survey of Alfred’s life, from birth up to about a decade before his death. The middle portion of only three short chapters covers Asser’s “own contribution to Alfred’s activities” (p. 55). The final section, from chapters 90 – 106, evaluates the success and failure of Alfred’s reign, by looking at specific events.

From the beginning, Asser appeals to the heritage of the great King, but listing his lineage not only to the great pagan gods, as had been previously done by Anglo-Saxon authors, but connects Alfred’s lineage to Christianity and biblical genealogies, all the way to Adam. The book’s first section follows the basic framework of the Anglo-Saxon Chronicle, though Asser includes many new details particular to Alfred’s life. Not only is Alfred presented as divinely appointed, but also this appointment is demonstrated by two separate pilgrimages as a youth to Rome, where Alfred was received by the Pope, and set aside for rule.

While Asser does utilize religious underpinnings for his presentation of Alfred, he does not rely solely upon them, but shows that Alfred was a family favorite, and showed remarkable intelligence from an early age. Though circumstances kept Alfred illiterate as a youth, he was able to memorize many books, especially the scriptures. This background will later serve as motivation for Alfred to promote education among the people, leading to his translation work and educational reforms.

Alfred’s rise to power, after the death of his father and brothers, how he faced the Vikings in battle, usually successfully, and began to unite and organize the multiple Anglo-Saxon kingdoms are all described, and connected to Alfred’s higher purpose, from Asser’s perspective. Marriage, children, and illness were all part of Alfred’s life, but more attention is given to his public works than his private life. The exception was where the two intersected, such as Alfred’s increasing ability to read, write, and translate, and how he utilized those skills.

The short intermediary section shows how Asser helped with Alfred’s work, especially regarding translation and education. At this point, Asser ceases to rely upon the chronology of the Chronicle, as he was personally involved in Alfred’s life. He no longer needed to use other sources for his content, but could relate his own experiences. His first task, in this section, is to show the intimate work relationship the two shared with one another. As such, he explains how Alfred was miraculously given the ability to read and write in Latin, and thereby able to begin massive translation work of important books and scripture into the Anglo-Saxon language.

The final section considers various aspects of Alfred’s reign, especially how he endured constant physical pain in order to accomplish his kingly work. This is a theme that Asser presents several times, again probably making a Christian connection, since Alfred had requested that he be given some physical ailment that would keep him humble, but not incapacitate him from ruling. Allusions to similar biblical ailments seem to be Asser’s intent (such as the “thorn in the flesh” of St. Paul). In a sense, Alfred is martyr-like. In spite of his pain and illness, he “struggled like an excellent pilot to guide his [land]…he did not allow it to waver or wander from course” (p. 101).

Alfred’s division of his wealth, for the benefit of the Church and the kingdom, are another aspect that Asser presents to demonstrate the wisdom of the king. In this manner, the revenue of the kingdom was divided among those who governed, craftsman, and the Church. Even after this division, Alfred committed to offer of himself to the Church and had candles made to help him pray for half of each day, as he had promised earlier.

Asser’s final chapter discusses Alfred’s attempts to overhaul the judicial system of the day. He had no desire to allow dishonest judges to be in place in his kingdom, but supported those who would be fair and equitable with the people. His influence on this group also encouraged them to become more involved in education.

The book ends abruptly, and it is assumed that it was never finished. Asser either never returned to the work to complete it, or was hindered in some way from doing so.

What Are The Strengths And Weaknesses Of The Book?

For the reader acquainted with the Anglo-Saxon Chronicle, Alfred’s biography is easy to read, and provides important details of the man and era. In that sense, Asser’s work is a great supplement to the other. The content about the education reforms and translation work of Alfred gives insight into the educational situation, or lack thereof, in his day.

The work is short, easy to read and understand. Admittedly, the translator points out that some of the passages in the oldest manuscripts are garbled, but the translation glosses help to clear these up for the modern reader. The endnotes are also very informative and helpful. While the introduction to the larger work covers other texts that are not relevant to this assignment, it does give present important considerations about the author (Asser) and subject (Alfred), which allow the reader to contextualize the material.

For the modern reader, it can be tedious to read Asser’s repeated argument that everything Alfred did was divinely inspired, or something to that effect. The abrupt ending does not allow for any type of closure to the story of Alfred. One must look elsewhere for the end of the story.

A student of Anglo-Saxon History should read the book. It is an important look at one of the most important characters of the period. It provides details available nowhere else, and allows the reader to learn about the cultural context, concerns, and policies of this great King.

Have We No Right To Happiness?

Lessons from Nixon – Facing Your Enemies